Why I believe Jonathan govt not behind bomb attack on Buhari: Col. Umar 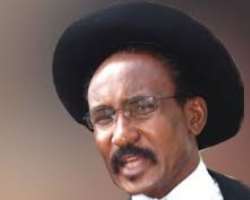 Why I believe Jonathan govt not behind bomb attack on Buhari: Col. Umar
Listen to article

Former Governor of Kaduna State ,Colonel Abubakar Dangiwa Umar (rtd) has come out strongly defend President Goodluck Jonathan's administration over allegations that it might have a hand in last week's bomb attack on former Head of State, General Muhammadu Buhari.

Buhari, a key leader of the opposition All Progressives Congress,APC survived a bomb attack in Kaduna ,Wednesday 23rd July 2014.

The attack has elicited diverse reactions, with some especially those from the opposition divide trying to make a political connection with the attack, another group of Nigerians have alleged that the attack might have been staged managed by the retired general to burnish his image against charges of being a religious bigot.

The arrest of a man dressed like a woman by the security men shortly after the attack, which point to Boko Haram as being behind the attack, has done little to assuage the political brinkmen.

Buhari's, who is seen as the most likely presidential candidate for the opposion APC in 2015, had failed at three previous attempts at the top seat largely because of the mistrust Christians have against him.

Colonel Umar (rtd) in a statement on Tuesday tried adduce reasons that make it unlikely that the Jonathan's administration could be behind the attack.

According to him, the fact that Goodluck Jonathan government upgraded Buhari's security long before the bomb attack makes it absurd to draw any link between the attack and his administration.

He said “The point then is how can a government that is intent on assassinating the general provide him with added security? It would have been most strange indeed for a government planning to assassinate this very popular Northern icon to retain as its National Security Advisor, Colonel M.S.Dasuki, son of the Sultan of Sokoto and his brother-in –law, General Aliyu Gusau as its Minister of Defence, or even its Inspector General of Police, M.D. Abubakar from Zamfara State.”

He statement reads in full,
“When on Wednesday 23rd July 2014 some yet to be identified persons attacked the convoy of General Muhammadu Buhari with a car bomb, some of his supporters or his representatives as one of them claimed on BBC radio Hausa service accused the federal government of complicity. This was even before investigations commenced.

“I was concerned and worried by possible dangerous repercussions of such allegations on the peace and unity of the country, which is currently under severe stress. I therefore decided not only to condemn their actions but also to adduce evidence to counter their wrong and preposterous allegations. Unfortunately my press statement, which was published, did not entirely include most of the points I raised in my rebuttal. To avoid misrepresentation and misunderstanding, I find it necessary to issue this clarification.

“When about 4 months ago General Muhammadu Buhari issued a condemnation of the activities of Boko Haram (BH) sect, the presidency praised him for what it saw as an act of courage and statesmanship. Some of us agreed and welcomed this reaction particularly because it would have the positive effect of building the much-needed consensus in the war against the BH insurgency. We were also delighted by General Buhari's action because it provided another evidence, if any was needed, that he was not a religious bigot, and like most Northerners did not share or support any terrorist religious ideology.

“However, fearing the usual BH reprisal we advised the federal government to beef up security around the General. The FG agreed and reached out to General Buhari with this proposal. By mutual consent, his security was upgraded. I have no doubt that this must have contributed to his survival of the attack.

“The point then is how can a government that is intent on assassinating the general provide him with added security? It would have been most strange indeed for a government planning to assassinate this very popular Northern icon to retain as its National Security Advisor, Colonel M.S.Dasuki, son of the Sultan of Sokoto and his brother-in –law, General Aliyu Gusau as its Minister of Defence, or even its Inspector General of Police, M.D. Abubakar from Zamfara State.

“Not entirely satisfied with what was published from my earlier press release I decided to discuss this issue with my friend and brother Basorun Akin Osuntokun. He offered to carry some of the details in his Thisday Friday column-which he did.

“I have since learned that the bulletproof vehicle, in which General Buhari was riding at the time of the attack, was provided to him by an APC chieftain possibly an APC governor. My reaction to this is that it does not detract from the fact that the federal government indeed reinforced the General's security about four months ago. Bulletproof vehicle is only a component of the security infrastructure. General Buhari himself was reported to have told Sahara TV “I am not bothered by them (BH) targeting me. The government has given me adequate protection.”

“Once again I appeal to our political elites to desist from politics of brinkmanship all aimed at achieving their narrow political interests. They need not be reminded that a violent disintegration of Nigeria would be an ill wind that will blow nobody any good, as my brother Akin would say.