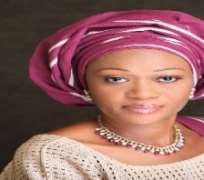 Vice Chairman of the Committee on Employment, Labour and Productivity, Senator Oluremi Tinubu, came under scrutiny on Thursday following her comments about the leadership of the Senate, whom she accused of kotowing to the executive arm of government.

The senator, wife to leader of the opposition All Progressives Congress (APC), Mr. Bola Tinubu, is to face the senate committee on ethics and privileges to explain statements credited to her about the activities of the senate.

On Thursday June 26, Senate Leader, Victor Ndoma-Egba (SAN), faulted a comment made by Senator Tinubu, over her criticisms of the upper chamber and its leadership in the media.

Ndoma-Egba drew the attention of his colleagues to some newspaper publications on the interview granted by Tinubu where she reportedly condemned “the rot” in the Senate.

NThe Senate leader said  there was the need for the Senate to investigate Tinubu, who is the  Vice Chairman of the Committee on Employment, Labour and Productivity,  over disparaging comments against the red chamber and its leadership.

The Senate Leader moved a motion citing  Order 43 (Privileges) of the Senate Standing Orders (2011, as amended) and  informed the chamber that some newspaper interviews  granted by Senator Tinubu reportedly bemoaned “the rot” in the Senate.

He said that in another  interview, Senator Tinubu had said the leadership of the Senate panders to the Peoples Democratic Party-led (PDP) executive arm of government.

The Senate Leader said:  “I would have brought this matter on the first day of our resumption, but for respect for the memory of our departed colleague, Senator Dahiru Awaisu Kuta.

“Today, therefore, is my earliest opportunity to raise it and that is why I raise this matter of privilege. There's a story carried in Thisday of June 5, 2014, attributed to a distinguished colleague of ours, Senator Oluremi Tinubu and the headline is this: 'Activities in the Senate are depressing' and I will read, with your kind permission, a portion of the story.

“Senator Oluremi Tinubu representing Lagos Central Senatorial District took a swipe at the leadership of the Senate, accusing it of poor performance. Tinubu, at a media parley to mark her third anniversary in the Senate, said activities in the the upper legislative chamber were depressing because its leadership had failed to address a lot of pressing national issues for partisan reasons.”

“She accused the Senate leadership of pandering to the wishes of the executive arm of government which is led by the Peoples Democratic Party (PDP).” I will just stop here.

“There's another story in the Daily Trust of Monday, June 9, 2014, again attributed to Senator Oluremi Tinubu: “Why I may not return to the Senate in 2015” and with your kind permission, I may just read a little of it. “Wife of the former Lagos State governor, Oluremi Tinubu said she may not return to the Senate next year if the rot in the upper chamber persists…Mrs. Tinubu said she's depressed with the various activities that go on in the Senate…”

“I think it is most unkind, it is most uncharitable for a distinguished Senator who has the opportunity of raising concerns with her colleagues, not doing so and going straight to the media to play to the gallery.

“So, I object very, very seriously to the comments made by Senator Tinubu and I want to submit that my privilege, as a Senator of the Federal Republic of Nigeria has been breached by the said Senator.”

The senator, who represents Lagos Central Senatorial District, had alleged that the actions of the Senate leadership were always sympathetic to the People's Democratic Party-led executive arm of government.

Ndoma-Egba said, “I would have brought this matter on the first day of our resumption but for respect for the memory of our departed colleague, Senator Dahiru Awaisu Kuta.

“Today, therefore, is my earliest opportunity to raise it.

The Deputy Senate President, Ike Ekweremadu, who presided over the session referred the matter to the Committee on Ethics, Privileges and Public Petitions chaired by Senator Ayo Akinyelure, a Labour Party member representing Ondo Central.

Ekweremadu said, “This matter is referred to the committee so that they can have Senator Tinubu present her own side of the story and if possible, invite the newspapers which published the stories.”

He mandated its committee on ethics and privileges to look into the matter and report to the Senate for consideration in two weeks.