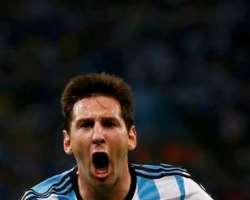 Lionel Messi scored a brilliant injury time winner as Argentina overcame Iran 1-0 to book their place in the last 16 of the World Cup in Belo Horizonte Saturday. Four-time world player of the year Messi curled in a sublime shot from just outside the area in the first minute of stoppage time to break Iranian hearts after a gripping Group F battle. Argentina captain Messi had been largely anonymous for much of the match as Iran frustrated the South American giants at the Mineirao Stadium. Iran, with only one win in four appearances at the World Cup, looked to have secured a famous draw.

Argentina's forward and captain Lionel Messi celebrates after scoring a goal during a Group F football match between Argentina and Iran at the Mineirao Stadium in Belo Horizonte during the 2014 FIFA World Cup in Brazil on June 21, 2014. AFP PHOTO . The Asian minnows might even have snatched victory only to be denied by Argentina keeper Sergio Romero, who pulled off fine second half saves from England-based duo Ashkan Dejagah and Reza Ghoochannejad. But with the clock ticking down, Messi picked up the ball on the edge of the area and after being granted time to pick his spot, curled in his second goal of the tournament. The result leaves Argentina assured of a place in the last 16, joining Colombia, Costa Rica, Chile and Holland in the second round. In other matches Saturday, Germany's hat-trick hero Thomas Mueller will look to add his goal tally when his side faces Ghana in Fortaleza. German coach Joachim Loew highlighted Mueller's importance — and not just his goals — ahead of their game at the Castelao Stadium. 'He is unpredictable, he can score at any moment,' Loew said. 'He is a boy who is very motivating for the others. He is funny, joyful. He is very positive, he talks to everybody. He is a real team player. 'He can transmit his good humour and spontaneity. It is very important for us,' declared Loew. Germany may have to shuffle their defence against Ghana, however, as Mats Hummels struggles with a thigh injury. Ghana are seeking to recover after their 2-1 loss to the United States. The game — a rematch of a group game in 2010 which the Germans won 2-0 — will feature brothers on opposing sides. Jerome Boateng will be at the heart of Germany's defence, whilst his half-brother, Kevin-Prince Boateng will be hoping for a start with Ghana. Nigeria and Bosnia, both desperate for a win to get them back on course behind Argentina in Group F, play in Cuiaba. Nigeria are currently ahead of their rivals with one point from their draw with Iran earlier this week. Meanwhile, the World Cup hosts are to boost security around Rio de Janeiro's Maracana Stadium to prevent invasions by ticketless fans, officials said. Rowdy fans gate-crashed each of the two matches at the iconic stadium so far, raising concerns about security at the venue which will host the July 13 final. 'We are going to establish an extra isolation cordon with mobile fences in the Maracana's sensitive zones and mobilise 600 police in those zones,' Rio military police commander Jose Luis Castro told a press conference. BELO HORIZONTE