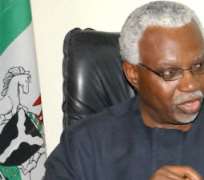 Two members of the House of Representatives ad hoc committee, which probed the scam in the fuel subsidy regime in 2012, Messrs Farouk Lawan and Boniface Emenalo, were on Wednesday re-arraigned for collecting $620,000 bribe in their course of duty.

The Independent and Corrupt Practices and other related offences Commission re-arraigned the two of them on seven counts before Justice A.A.I Banjoko of a Federal Territory High Court in Gudu, Abuja.

The re-arraignment followed the elevation of the former trial judge, Justice Mudashiru Oniyangi, formerly of the FCT High Court, to the Court of Appeal.

The development warranted the need for the matter to start afresh before another judge.

The two legislators again pleaded not guilty to all the counts on Wednesday as they earlier did on February 1, 2013, when they were first arraigned.

They were accused of collecting the total sum of $620,000 bribe in April 2012 from the Chairman, Zenon Petroleum and Gas Ltd, Mr. Femi Otedola, in order to remove his company's name from the list of firms indicted by the committee.

Lawan and Emenalo were then the Chairman and Secretary (respectively) of House of Representatives Ad Hoc Committee on Monitoring of Fuel Subsidy Regime, whic probed the alleged subsidy scam.

After the accused persons took their plea, the defence counsel, Mr. O. Jolaawo, urged the court to allow the bail earlier granted his clients on February 8, 2013, by the former trial judge, to continue in the same conditions and terms, which they had both met.

The prosecuting lawyer, Mr. Adegboyega Awomolo (SAN), did not oppose the application.

The judge granted the request but not until all the four sureties, two among whom stood for each of the accused persons, were present in court and agreed to continue to serve as the sureties for the two accused.

The former trial judge had then granted bail to the accused in the sum of N10m with two sureties each. They were also ordered to release their passport as part of the bail conditions.

It will be recalled that the accused had challenged the competence of the charges preferred against them.

The earlier trial judge had refused to quash the charges as they requested, consequent upon which the accused persons appealed against the decision of the lower court.

But the Court of Appeal ruled upheld the ruling of the lower court ordering the accused to face trial.

In count two, Lawan was accused of corruptly asking for $3,000,000 from Otedola with the intention of favouring him (Otedola) in the report of the adhoc committee, an offence punishable under section 8(1) of the same Act.