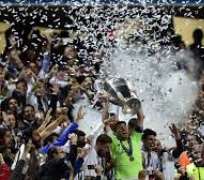 Lisbon: Real Madrid won the Champions League for the 10th time thanks to extra time goals from Gareth Bale, Marcelo and Cristiano Ronaldo as they came from behind in dramatic circumstances to beat Atletico Madrid 4-1 in Lisbon on Saturday.

Atletico seemed set for their first ever European crown as they led deep into stoppage time thanks to Diego Godin's first-half header, but Sergio Ramos took the game into extra time with a towering header in the 93rd minute.

And for the second time this season having already scored the winner to hand Real the Copa del Rey against Barcelona last month, Bale scored the crucial goal when he headed into an empty net after Thibaut Courtois had parried Angel di Maria's effort.

With Atletico committed to finding an equaliser, Real were able to counter-attack at will and Marcelo killed the game off when his low shot had too much power for Courtois before Ronaldo sealed his return to Lisbon with a fourth from the penalty spot.

'It is the most important goal I have scored,' said Ramos.

'It is an incredible feeling. We kept fighting until the end for the fans. It is not my goal, but one for all Madrid fans, my family and all those that have supported us until the end. We deserved it after so many years.'

'I am very happy for this because we have won a trophy that for Real Madrid is very important. We have worked hard all year for this.'

Atletico captain Gabi admitted that his side had been well-beaten in extra time after suffering the body blow of Ramos' equaliser.

'They managed to equalise and that is football,' he told Television Espanola.

'After the extra time they were deserving winners. We have competed for a year like animals and we have gone as far as we could.'

However, Atletico boss Diego Simeone said no tears should be shed given his side's amazing success in winning La Liga and reaching the final for just the second time in their history.

'This match doesn't deserve a single tear,' said the Argentine.

'When you give everything you cannot ask for more. There is another team and other players out there and that is football.

'Now we have to rest, relax and prepare ourselves to compete and bother the big teams again next season.'

However, the Brazilian-born striker lasted just nine minutes as he hobbled off to be replaced by Adrian Lopez.

Bale had the first clear chance of the match when the Welshman pounced on Tiago's errant pass in midfield and scampered forward into the area but side-footed wide on his favoured left foot.

Three minutes later it was Atletico who took the lead as Juanfran headed a cleared corner back into the box and Godin took advantage of indecision by Iker Casillas to loop the ball over the Spanish captain and just over the line.

Ronaldo had a couple of half-chances to level at the start of the second-half as Courtois awkwardly tipped another free-kick from distance over before the Portuguese captain headed just wide from a corner.

Taking risks
As Real took more risks to find the equaliser, though, Atletico were also becoming more dangerous on the break and Adrian was unfortunate to see his goalbound effort deflected just wide by Sami Khedira.

Bale wasted another good opening as he sprinted onto Ronaldo's pass, but chose the wrong option in trying to squeeze the ball home at the near post and dumped the ball into the side netting.

Just when Atletico thought they had the trophy won, though, Real got their reward as Ramos rose to power Luka Modric's corner past the helpless Courtois.

Atletico's tiredness then showed in the second period of extra time as Real had too much pace and power and finally went in front 10 minutes from the end when Di Maria burst into the area and despite his effort being saved by Courtois, Bale was on hand to head in at the back post.

Courtois also got a hand to Marcelo's low drive eight minutes later, but the Belgian international couldn't keep it out.

And Ronaldo got the goal he craved back in his homeland when he was clipped by Gabi moments later and got back up to slam the resulting penalty home. AFP