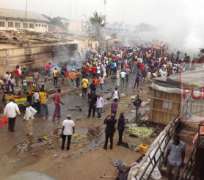 The National Working Committee of the Peoples Democratic Party has postponed, by one week, the presidential flag-off of Ekiti State governorship campaign slated for Thursday.

This is contained a statement signed by the party's National Publicity Secretary, Mr. Olisa Metuh, on Wednesday in Abuja.

According to the statement, the postponement is in honour of the victims of Tuesday's explosions in Jos.

No fewer than 75 persons lost their lives to the two blasts which occurred in the central area of Jos.

'Our hearts reach out to the victims and their families, and we pray that Nigerians unite as we say no to terrorism,'' it said.

The News Agency of Nigeria reports that President Goodluck Jonathan was to lead PDP chieftains to Ekiti to present the party's flag to the state governorship candidate, Mr. Ayodele Fayose, at the Oluyemi Kayode Stadium.

The party expressed the hope that kidnappers of more than 200 schoolgirls from the Government Girls' College, Chibok, Borno, would soon release them unconditionally.

The students were abducted on April 14 by the Boko Haram sect. NAN