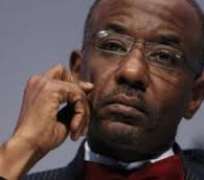 A Federal High Court in Abuja has dismissed a suit filed by the suspended Governor of the Central Bank of Nigeria, Sanusi Lamido, challenging the powers of President Goodluck Jonathan to suspend him from office.

The court had on April 8 reserved judgment till today after hearing the respondent counsel's preliminary objection and Mr. Sanusi's counsel's originating summons, as well as the adoption of same.

Mr. Sanusi had on February 24 challenged his suspension from office by the president and urged the court to reverse the decision.

The President, the Attorney-General of the Federation, and the Inspector-General of Police were joined as first, second and third defendants respectively, in the suit.

Mr. Sanusi had urged the court to restrain the defendants from 'obstructing, disturbing, stopping or preventing him in any manner whatsoever, from performing the functions as Governor of the Central Bank''.

Mr. Sanusi had also sought to be allowed to fully enjoy the statutory powers and privileges attached to the office, arguing that any delay might cause him irreparable and serious damages.

Ruling earlier, Mr. Kolawole had taken the substantive suit and preliminary objection together.

'In the instant case, where time is of essence, so that the plaintiff's tenure does not expire before the case is determined, the court rules necessitate we hear both applications together.

'By Order 1 Rule 4 of the Federal High Court, it is judicially expedient that the hearing of the originating summons be heard with the preliminary objection,'' he said.

Mr. Sanusi's tenure as CBN boss ends in June.
Fabian Ajogwu, the president's counsel, had in his preliminary objection, challenged the jurisdiction of the court to entertain the suit.

Mr. Ajogwu argued that by virtue of Section 254C (1) (a) of the 1999 Constitution, as amended, the Federal High Court lacked jurisdiction to entertain the suit.

The plaintiff's suit, he said, fell under the purview of the National Industrial Court which had exclusive jurisdiction to entertain matters relating to employer-employee issues like in the instant case.

Mike Ozekhome and Solomon Umoh, counsel to the Attorney-General and Inspector-General of Police, respectively, had also aligned with Mr. Ajogwu's arguments on jurisdiction.

'The dispute between the plaintiff and the president pertain to issues bordering on the plaintiff's employment, which is a matter for the National Industrial Court.

'I urge my lord to wash his hands off the case, like Pontius Pilate did, and dismiss the suit,'' Mr. Ozekhome said.

However, Kola Awodein, Mr. Sanusi's counsel, while arguing on point of law, said that the defendant's counsel got it wrong by assuming that the case was about his client's employment.

'Our suit as formulated is not about employment as the plaintiff is not an employee of the president, especially looking at the issues for determination and the relief sought.

'It is clear that the court is invited to interpretative duty to declare what the law is within the purview of Section 251 of the constitution,'' Mr. Awodein said.