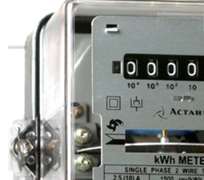 Eko Electricity Distribution Company (EKEDC) has concluded plans to roll out a total of 360,000 electricity meters to customers under the distribution network, the company's Managing Director and Chief Executive Officer Mr. Oladele Amoda, has said.

According to him, the company will expend N1.3 billion on the project.

The first phase of the project, which is mean to redress the current situation where customers are presently billed without meters in their premises, will start with about 5,000 meters for all high voltage or maximum demand customers of the company, he said.

According to him, this category of customers are responsible for about 70 per cent of the company's revenue profile.

Amoda further hinted that under the scheme, apart from those not having meters, customers having obsolete and malfunctioning meters would also have their meters replaced.

Earlier in his post privatisation update report to the committee, the EKEDC boss disclosed that the company had embarked on a number of measures to engender a total turn-around in the company's services to its customers.

These he said, included the embedded generation project, evolvement of a new human resource policy with emphasis on workers' safety, training and improvement of general working condition.

Speaking further, he added that another sum of N2.3 billion would be spent on network rehabilitation, system upgrade and reinforcement, with a view to drastically reducing equipment downtime and enhancing customer satisfaction and service delivery.

Responding, the Chairman of the Senate Committee on Privatisation and Commercialisation, Senator Gbenga Obadara, said the Senate would always be ready to work with the newly privatised electricity distribution companies and other stakeholders in the electricity sector for the purpose of jointly finding a lasting solution to the problems militating against regular power supply in the country.

According to him, the Senate was aware of both the expectations of Nigerians from the newly privatised electricity companies as well as the constraints still bedevilling the sector.

He said energy theft and vandalism still constitutes one of the major challenges facing the companies.

Speaking further, Obadara said while the senate would always want to protect the interest of Nigerians to ensure that they are not exploited by the new companies, it would also facilitate the existence of a conducive atmosphere for the new companies to operate without any hindrance.

Also speaking at the occasion, a Director of the company, Dr. Tunji Olowolafe, said customer satisfaction, rather than profit making, has always been the main focus of the company. He said the new owners believed that the customer needs to be satisfied first so that he can pay for service rendered.

Olowolafe said $150 million out of the $250 million the company plans to invest on the improvement of its services to customers has been secured.

The impact of this, he said, on the general service delivery of the company would be manifest for all to see soon. He also said the company had started employing the best available technology in all areas of its operations.