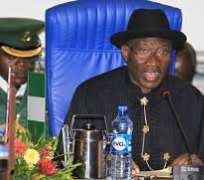 About 20,000 Nigerian troops have been deployed to search of the over 200 school girls abducted from a secondary school in Chibok, Borno State by the deadly Boko Haram terrorists, President Goodluck Jonathan said on Saturday.

Jonathan also said that the insurgent group which has so far killed more than 12,000 people since 2009 has transformed massively both in character and objective.

The president who was speaking Paris, France where he addressed the regional summit on Boko Haram insurgency convened by French President, Francois Hollande, said the ultimate objective of the vicious guerrilla-warfare campaign of the terrorists “is to destabilize the country and take over Nigeria in order to turn it into a base of operation in West Africa and the entire continent”.

He pointed out that what started as a local insurgency in North Eastern Nigeria in 2009 has now evolved into full-scale war, targeting the stability and integrity of Nigeria and has become the new frontier of the global war of terrorism.

“This unconventional war has so far claimed over twelve thousand lives, with more than 8, 000 persons injured or maimed, not to mention the displacement of thousands of innocent Nigerians”, the President said.

The president said that the major hamstring in the search and rescue op­eration so far has been the lack of reliable information about the whereabouts of the girls and the circumstances of their disappearance.

“We shall spare no effort, we shall explore every avenue; we shall turn every stone, to ensure the return of the girls to their families and that the terrorists are defeated,” her assured.

Jonathan commend­ed President Hollande, for convening the summit, say­ing it underscored the French leader's commitment to Africa's stability, peace and development. He said the Boko Haram attacks which he described as “unconven­tional war” had so far claimed “over 12,000 lives, with more than 8, 000 persons injured or maimed, not to mention the displacement of thousands of innocent Nigerians.”

The president who com­mended his colleagues from neighbouring countries, Presi­dent Boni Yayi of Benin Re­public, President Idriss Deby of Chad,  President Paul Biya of Cameroon and President Mahamadou Issoufou of Ni­ger Republic, for their solidar­ity and friendly disposition in attending the summit at a very short notice, explained that declaring a  state of emergency in three states of Adamawa, Borno and Yobe, was the responsible thing to do.

“This became necessary to give the security forces the required scope and authority, to enable them op­erate more efficiently in the affected areas in order to gain victory,” he said.

President Jonathan com­mended the European Union, the United States Secretary of State, Senator John Kerry, and the Rt. Hon. William Hague, the Foreign and Common­wealth Secretary of the Unit­ed Kingdom for attending the Summit.

He said “You have borne with my country, the huge burden of our counter-insurgency operations, some­times with collateral damage. I thank you for your support and cooperation.”

Jonathan said their con­cern and empathy with the government and people of Nigeria were clear demon­strations of true solidarity and brotherhood in ensuring that the current security challeng­es facing the country were addressed in a definitive and conclusive manner.

On Boko Haram, he further explained, “But let me state clearly from the outset that what started as a local insurgency in North Eastern Nigeria has now evolved into the new frontier of the global war of terrorism against our civilization, our way of life, and against the many prospects of stability in our region. This is not any­more a challenge to Nigeria alone; it is a threat to each and every one of us in this room.

“The Boko Haram sect emerged in 2002 while its insurgency phase started as far back as 2009. Officially known as the Jama'atu Ahlis Sunna Lidda'wati Wal Ji­had, which in English means “People Committed to the Propagation of the Prophet's Teachings and Jihad”, the group is more commonly identified with its motivating principle, and referred to as Boko Haram which literally means, Western or non-Is­lamic education is prohibited.

“The group is hostile to de­mocracy; it uses every means to indoctrinate its members; its ultimate objective is to destabilize the country, and take over Nigeria in order to turn it into a base of operation in West Africa and the entire continent.

“Since 2009, we have had to contend with many attacks and killings, which have now developed into a full-scale war targeting the stability and integrity of our nation. Boko Haram has launched a vicious guerrilla-style campaign against the government and the people of Nigeria. It has attacked schools, slaughtered students in their dormitories, destroyed villages, commu­nities and government infra­structure and has wreaked havoc on the economic and social life of our people.

“This unconventional war has so far claimed over 12,000 lives, with more than 8,000 persons injured or maimed, not to mention the displacement of thousands of innocent Nigerians.

“We have developed in­telligence, which indicates clearly that global terrorist networks are deeply involved in the recent activities of Boko Haram, which has now turned into an integral part of the Al Qaeda network as the West African branch.”

Gunmen suspected to be members of the deadly Boko Haram Islamist sect have kidnapped 10 Chinese expatriates working for a construction company at a Nigeria-Cameroon border village.

Security sources said the gunmen in a commando-like operation swooped on workers at a road construction site at Wa­zza, a village along the Nigerian border, north of Cameroon, and opened fire on the people.

There were however conflicting reports on the actual location of the village, while some claimed shares border with Gamboru/Ngala, oth­ers maintained the area is located around Gwoza Local Government which has be­come a Boko Haram stronghold in recent times.

A Daily Sun report quotes one of the sources as saying,   “The armed men shot dead some of the workers including a Chinese and then kidnapped 10 other Chinese civ­il engineers at the site,” the source said.

Hundreds of Boko Haram insurgents are believed to be hiding around the Nigeria-Cameroon border, especially the hilly Gwoza area where they launch at­tacks on communities around the area, a military source stated. “This area has continued to be their hideout where they attack and retreat whenever they are en­gaged by troops. A better cooperation between Nigerian and Cameroonian governments will assist in addressing the challenge,” the source maintained.

President Goodluck Jonathan dis­cussed the issue of cooperation with Presidents of Cameroon, Niger and Chad at a meeting in France this weekend.

Meanwhile no fewer than 40 people were reportedly killed in two separate attacks by Boko Haram insurgents be­tween Friday and Saturday.

Report has it that some government officials have already visited the area, among them the Chairman of Bama Lo­cal Government Area, Baba Shehu.

The LG boss who sympathised with the victims, decried the helplessness of security agents in defending the people despite the state of emergency imposed on Borno and the neighbouring states of Yobe and Adamawa for over a year.

Sources said some gunmen suddenly appeared from the bush and attacked motorists at a deserted location between Mainok and Benisheik and killed nine people. The incident according to sources occurred at about 6pm on Friday. A com­mercial driver told journalists that the in­surgents almost killed him save for divine intervention, as he refused to stop when they fired at his vehicle.

“I failed to notice that people in a nearby village were stopping me. The at­tackers shot at my vehicle and killed three people. The rest of us were lucky to have escaped,” he said.

Another source said the insurgents snatched a lorry loaded with about 150 bags of beans and drove it into the bush without a trace.