Voluptuous Daniella Okeke: Now A 'New Creature' In The Lord? 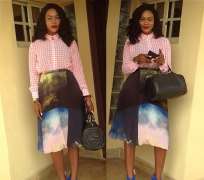 Daniella Okeke has been using her curvy body to cause commotions on social media lately. The voluptuous actress, who hails from Imo State, studied Fine and Applied Arts at the Delta State University (DELSU), and has starred in some movies, including Desmond Elliot-directed flick, 'Lagos Cougars'.

Recently, the silver screen star shared new pictures of herself looking breathtaking, as she was seen looking different from her usual self.

This has brought about the question 'if Daniella has now turned a born again?'