Emerges Deputy Gov Of The Year, As Labour Unions Confer Him Pillar Of Labour
By Uche Onwuchekwa 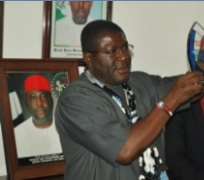 Prince Eze Madumere is in the news for all for the good reasons. Last Saturday, April 26, 2014, he was honoured with the Deputy Governor of the year and the best Deputy Governor in the South east by the Newname Magazine and Newspaper.

The Publisher of Newname Publications, Dr. Rita Moses, while addressing the guests and the media said Madumere emerged the best Deputy Governor for his commitment, dedication to service and his exemplary life is service to humanity. The group revealed Prince Madumere's monthly donation of substantial amount of his income to cater for the less privileged and orphans.

The Newname further showered encomium on Madumere on his track record difficult negotiations, resolution of difficult skirmishes and exploit in the restive oil producing areas as a whole and landmark one, which was an long aged between problem between Irete Community and Nigeria bottling company Limited and Communal Crises in Mbieri, Mbaitoli Local Government of Imo State.

In the same vein during the Workers Day Celebration, the joint Labour Union of Nigeria Labour Congress and Trade Union Congress honoured him the Pillar of Labour Award owing to his dedication and vibrancy in labour engagement. The Unionists also lauded his leadership qualities in handling industrial issues as he has remained fair and rapid in responding to labour issues.

While conferring the award on Prince Eze Madumere, MFR, Imo State Deputy Governor, the Chairman of the Nigeria Labour Congress, Dr. Reginald Anyadike said their choice of Mdumere as the Pillar of Labour stemmed from not only that he is Labour friendly but has shown strategy and competence in handling labour matters as a go between between the Governor and the Unions.

Describing Madumere, Theodore Ekechi, the Commissioner for Information and Strategy, in his submission said Imo Deputy Governor deserves not just the best in the South East but in Nigeria.

The Managing Director of Imo State Oil Producing Area Development Commission ( ISOPADEC), Dr. Henry Okafor described Prince Eze Madumere as the greatest motivator he has ever come across who has been a source of inspiration to many. He said he deserves even much more. He narrated his input is crises management especially as it concerned the oil producing areas.

Further more, Jeff Imo, the out gone two time Transition Chairman of Onuimo Local Government Area and a business mogul submitted that Prince Eze Madumere has remained a silent leader who has remained focused in his natural service to humanity. " In the far away United States, he was a rallying point for most of our people. The man Madumere is noiseless as most of his good work are unknown. However, these group spotted him, they must have done a serious work. He deserves even much more."

It will be recalled that the United States trained Management Consultant has several awards including National Honours Award of Member of the Order of the Federal Republic to his credit. These awards represent acceptance from various age groups and various professional bodies. been playing the needed supporting role to his boss. This he has done with passion to the extent that he has all the Rescue Mission Policies and Programmes on his fingertips. This is not unconnected to his sought after status by intelligent political appointees. His pieces of advise if taken would always set whosever that is in question apart from others.

Variously, his boss, Owelle Rochas Okorocha, has described as his beloved son in whom he is well pleased owing to Madumere commitment, dedication, industry, competence and above all his, despite all these attributes, he remains unrepentantly loyal and humble.

Prior the recent awards confirming people's positive votes reservations about Prince Eze Madumere, Archbishop of Orlu, Most Reverend Benneth Okoro in the month of February, 2014, described the number two citizen of Imo State as the best deputy governor Imo State has ever had.

For Madumere, in all these, he dedicated all the awards to Hod almighty and his boss, Owelle Anayo Rochas Okorocha who he said through him all his God given gifts are made manifest. He, however, said he would have refused the best deputy Governor Award but for the lesson therein for the youths. He further maintained that humility, loyalty, dedication, commitment, consistency, patriotism, good sense of judgement with good nature and above all patience and perseverance are virtues he said the youths must imbibe if they must make a head way in life.

However, what the future holds for Madumere, will be left to be seen. It is better to thread with some restraints as he will rightly tell you, I have always looked upon God for what He wants me to do at any point in time with respect to service to humanity especially the down trodden and poorest of the poor.