Celebs Flaunt Their Assets Because It Is Necessary—Funky Mallam 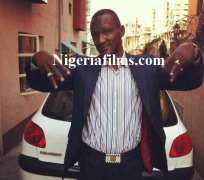 Some Public figures have turned showing off their assets as a hobby. Most of the time, the celebrities display their personal belongings on social media platforms. They also post pictures of their trips abroad, shopping and others on the internet.

This act has been criticized by some of their fans who term it as childishness.

Recently, Ali Baba vented his frustration on his fans who slammed him for posting picture of his wardrobe. The veteran comedian disclosed that Nigerians do not appreciate their own, but praise other international celebs who do the same thing they are being castigated for.

But for comedian-cum actor, Saheed Mohammed, also known as Funky Mallam, “it's ok for celebrities to flaunt their assets because that's what the society want to see before rating them big in the industry. It's just that one should not overdo it, otherwise, it looks childish."

"As for the trips, they are sometimes for holidays. That is part of the game and its very necessary. Helping out people with money, especially through charity, is cool too. However, flaunting too much on party, women and alcohol could bring a celeb back to his sad days,” he added.