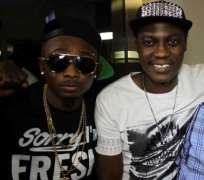 Sound Sultan may have parted ways with rave of the moment artiste, Sean Tizzle, but he still accords him much respect and love.

The Naija Ninja boss said that he does not have any ill-feelings against the artiste for leaving his record label to another.

“He is my boy. Just like what I told people, this life is a very simple place. It's all about forgiving and being real. As for me, as open minded as I could be, I told everybody that care to listen that we are good and I respect him,” he said in an interview.

Sultan added that they are both working together on a video which will soon be out.

“We are shooting a video with Karma, one of Naija Ninja artistes and even on my new album, Sean Tizzle is there. I featured him on 'Follow Me Go' and people love the song. He's my boy and whatever the mistakes or issue, we have moved on,” he noted.