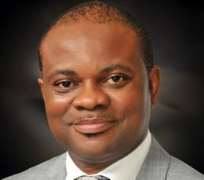 Governorship aspirant of the Peoples Democratic Party (PDP) in Rivers State, Hon. Nimi Walson-Jack, has said no state governor has power to appoint a chief judge without the recommendation of the National Judicial Council (NJC).

Walson-Jack stated this in Port Harcourt during a parley with newsmen to formally announce his intention to succeed Governor Chibuike Rotimi Amaechi after 2015 general election in the state.

He said: 'No governor can appoint a chief judge without the recommendation of the NJC.

According to him, Amaechi should have complied with the provision of the constitution by sending the name of whoever was recommended by the NJC to the State House of Assembly for approval.

Walson-Jack said: 'In the case of Rivers State, we did not do that. If Governor Amaechi had submitted the name of the candidate recommended by the NJC to the House of Assembly and it, knowingly or unknowingly, rejected the candidate for whatever reason, then, he could have gone back to the NJC for another recommendation. In Rivers State, the process was not complete.'

He expressed the hope that the NJC would triumph at the end of the long-running imbroglio in the state judiciary because it is the only body empowered by the constitution to recommend a judge to be appointed by a state governor with the approval of the House of Assembly.

Wilson-Jack, a former national secretary of the Nigeria Bar Association (NBA), said 'The constitution has given the NJC an assignment to do: that the NJC will recommend. If the NJC fails in this matter, then we are going to be faced with a constitutional crisis in the appointment of chief judges in other states of the federation.

Walson-Jack lamented the inability of the Rivers State branch of the NBA to have an effective voice in the current impasse, saying, 'The NBA, especially my branch here in Port Harcourt and other branches in the state, has not been effective in this matter. We have fought for others, but unfortunately when it affected us, we failed to act.

'It took a non-governmental organization (NGO), the Kengema Unity Forum (KUF), a forum of non-lawyers, to get a court judgment in respect of a matter that affects the bar and the bench. Unfortunately, we have not been able to fight for ourselves. There are lots of problems,' he said.

The governorship hopeful declared that the provision of the constitution as it affects the appointment of a chief judge is one of the simplest areas of the constitution to understand as the operative language is the most senior judge in the high court of the state.

'Governor Amaechi's appointment of Justice Peter Agumagu as the Chief Judge of Rivers State is unconstitutional. Although judges working in the Rivers State judiciary work for the state government, they are employed by the NJC,' he was quoted as saying.