Hit Or Miss? Tonto Dikeh’s Outfit Made By Official Stylist 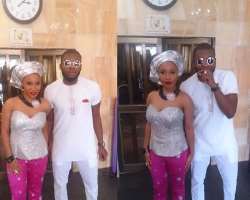 Popular Nollywood actress, Tonto Dikeh is one who knows how to stir controversies with her personality.

On Saturday, the 5th of April, at the traditional wedding ceremony of Nollywood's director, Moses Inwang and Emem Udonquak, which took place at Uyo, Akwa Ibom State, the light skinned actress was dressed in a back baring bustier on flared trouser sewn with the Aso-ebi attire.

Accompanied by her official stylist, Jeremiah Ogbodo, popularly known as 'Swanky Jerry', the 'Poko Queen' believes her dress is amazing.