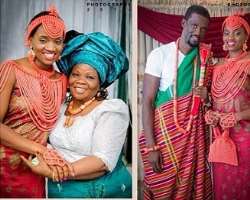 Secrets can not be kept away from the ears of people for too long As Ese Walter Who was a former COZA member Got married and thought it won't go viral, of course It is no news the young man is totally off the single market as it was confirmed that she tied the knot in a court registry with Benny Ark an OAP in Abuja sometime in February 2014. Though the date was not confirmed.

The latest couples had their traditional yesterday, March 8 which was also the groom's birthday so it was a double celebration for him and his family. It was sure that they celebrated on a high note yesterday.