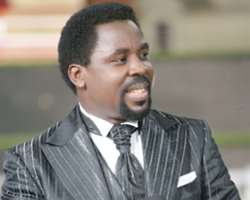 How did your relationship with Prophet T.B Joshua begin? Rev Chris Okotie said then that T.B. Joshua recruited or ordained you into his cult way back 1986.

I remember in 2001 a lot of ministers including Pastor Chris Okotie, Bishop Mike Okonkwo and Pastor Tunde Bakare did say things along that line. The truth is that they were all wrong. They were getting information from the wrong sources, and it is unfortunate that they believed their wrong sources; incidentally none of them asked me intelligent questions. I hope to write a book on the episode someday. I have so much to say about all that transpired, maybe for the future. It was an interesting period, but the truth is that what they said was not true. I was surprised when the fact that I related with Prophet T.B Joshua, sparked off controversies. I was very surprised. You wonder why? Because I related with a lot of folks and nobody said anything, so I wondered why they got so mad about this one.

This was no ordinary person. This was Prophet T.B. Joshua; a man whom most ministers believe is involved in occultic practices.

I was surprised that they all said that. Remember that Jesus visited non-followers, non believers and he was criticized by the religious folks of his day. They said this man eateth and drinketh with sinners. They said Jesus could not be a prophet of God because he ate and drank with sinners. I thought if I related with anybody, it shouldn't be a problem, even if he was a sinner. There was no reason for that. After all everybody needs the gospel. So from that stand point I was surprised at their response. It was the wrong response anyway. I remember that I made a tape then, called 'Truth on Trial' and there I said, “Just because you hate somebody does not mean I have to hate with you”. When Jesus related with sinners, they did not change him. So, no matter what they thought T.B. Joshua was, my relating with him shouldn't have been expected to change me. So, it was very wrong for anyone to have interfered.

They said he was of the devil…
Well, that is between them and God.

How exactly did you meet T.B. Joshua?
It was in 2001 that I met him or spoke with him for the first time, contrary to the assertions of the PFN leaders. He called me on the phone. He had been watching our programme on television with some of his visitors, and there was this episode of a little girl who was born blind, who received her sight at our crusade. He said he was moved by the miracle and decided to call me. That was our first contact. After that, we spoke several other times on telephone. At that time, I had only seen maybe two or three of his programmes on TV. I did not know much about him at all, and so when he spoke with me on the phone, we exchanged pleasantries, and made references to what we were doing.

In the process of time, on a particular Wednesday, several weeks after we had been talking on the phone, he called me on the phone and requested that I joined him in ministering to a particular man that was coming from Holland,

during a special service that night. I said we'll be having a service and he said his service was going to be all night long. I was going to finish mine about 9 pm and his was going to be all night, so I said 'alright, how long is it going to take me to get to where you are?' He said it's about 30 minutes, half an hour. I said ok, 'if I get out of here around 9 o' clock, I'll be there by 9.30. I'll try to make it'. I went there with several people.

We met for the first time, face to face then, and went into the congregation and he introduced me to them and I greeted the people. Of course a lot of them had been seeing me on television and so they were excited to see me come to their church. Shortly after I greeted them, I went with him to the healing section. We got to the healing section; he started out ministering to them while I was waiting because I was only going to join him in ministering to the foreigners based on his earlier request. When we got to the section where the foreigners were, most of whom were from Holland, we both ministered to the man who was sick of multiple sclerosis. I believe his name was Jan Westerhof; that was about it.

Now you must realize that before I met with T.B. Joshua, I'd been holding crusades and healing services for years. This was 2001 and by then I had held many crusades with thousands of people and we already had our programme, Atmosphere For Miracles, where we showed testimonies of people who were getting healed in our meetings. So healings and miracles were not new to me. When I met with him, of course I was excited, glad to see someone who was interested in the kind of things that I was doing.

When these controversies came up, when these pastors, Pastor Chris Okotie, Bishop Mike Okonkwo and Pastor Tunde Bakare got on television and began to say a lot of things, I actually had to maintain an association of sympathy with the man. There are so many things I have to say like I told you, but these are all leaders in the church and I wouldn't want to say things that would make them unhappy with themselves or even make members of their congregation unhappy with them. I do not think that is my responsibility. So I would not want to go into certain details.

Did you at any moment think that your detractors were right and you wrong? After all you were the only man on your side of the divide.

I knew they were wrong all the time. Maybe I should define something, because the issue was not T.B. Joshua. They tried to make him the issue. He was not the issue. And I can prove that. The reason I said they tried to make him the issue is this; the president of the Pentecostal Fellowship of Nigeria, PFN, became the Vice President of the Christian Association of Nigeria, CAN, of which the Synagogue Church headed by T.B. Joshua is a part, Cherubim and Seraphim is a part, Celestial Church of Christ is a part and many other groups. In fact, he became the de facto Vice President of the Synagogue! And nobody said anything about it. There could be no better endorsement of T.B. Joshua from the PFN than that. If you could fraternize with all these groups as their Vice President, doesn't that say something, if indeed any of them was really of the Devil? Imagine Paul the Apostle as the Vice President of an occultic group? The point is T.B. Joshua was not the problem. They used him as the reason for their actions which were based on their wrong spiritual perceptions.