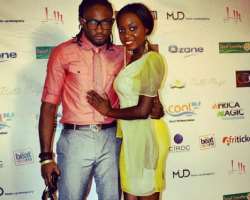 Uti Nwachukwu who has made buzz since he was associated with Eku Edewor as a gay has finally proven his critics wrong by confirming hi relationship with R&B singer Seun Oni who is better known as Saeon. He has been silent over who he is dating until now that he has decided to clear the air.

He reveals: 'It is true that I and Saeon are seeing each other and we are taking it one step at a time. I don't know how it came to the knowledge of the public. Saeon likes her privacy just like me too' Though, Saeon has not denied or confirmed the story

She only said 'It is out there already, I don't want to confirm or deny anything. I am only focused on my music. I'm releasing a song which features Wizkid tomorrow and that's my only concern for now,'

However, a source said they are not dating : 'Uti is not dating Saeon, he is just trying to show off so people will stop tagging him as gay. It is a perfect match with Saeon, because she on the other hand is trying to promote her music. Any publicity now, whether good or bad will help her career'.