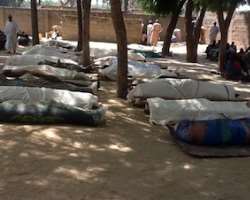 
No fewer than 43 people have been killed in the latest attack by Boko Haram gunmen against residents of two villages in Borno state, North east Nigeria.

Scores of homes were also destroyed by the trigger happy gunmen, firing indiscriminately on fleeing civilians.

Reports said heavily armed extremists in 4X4 trucks attacked a mosque, markets and government buildings in a massive assault on Konduga village, which had witnessed attacks before. Thirty nine people died in the village.

Boko Haram has said it is fighting to create a strict Islamic state in Nigeria's mainly Muslim north.

Shettima told reporters at the scene on Wednesday more than 70 percent of Konduga had been 'razed to the ground'.

It was gathered that another 65 people were being treated for burn and gunshot wounds in a hospital in the state capital Maiduguri.

Residents who fled the village have been too scared to return.

In the village dead bodies, including those of women and children, could be seen lined up in the courtyard of the central mosque.

The walls of the mosque were charred, as were those of a local clinic and a library.

Borno, along with the two neighbouring states of Adamawa and Yobe were placed under a state of emergency in May of last year, when the military launched a major offensive aimed at crushing the Islamist uprising.

But attacks have continued in the northeast, and there have been claims President Goodluck Jonathan's government has not done enough to stem the violence.