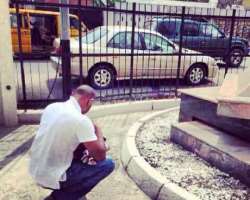 Son of Afro-beat legend, Fela Anikulapo-Kuti, Seun Kuti, recently posted a picture of himself carrying his daughter, Adi to the graveside of the late 'Abami Eda', as Fela was fondly called while alive. Fela was buried at the Kalakuta Republic after he died on August 2, 1997.

Seun wrote online about this development and informed his fans that death should not prevent his daughter from meeting her grandfather.