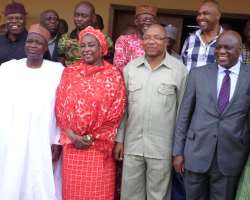 Onitsha, the Commercial nerve of Anambra state will soon breathe a fresh air in terms of maritime transportation as Senator Idris A. Umar, the Honorable Minister of Transport, has assured the people of that the Onitsha River Port will be put into adequate economic use soon to improve the nation's revenue.

Senator Umar who was represented by the Permanent Secretary, Federal Ministry of Transport, Engr. Nebolisa Emordi said the port will allow businessmen in Onitsha to move wares and equipment along River Niger from the Delta Tributaries to Lokoja .

Speaking on the theme- Putting Onitsha River Port into economic use before its concession, Umar however lamented that since commissioning, the River Port over one year ago, commercial activities has not commenced, thus rendering the port of low economic benefit to both the Federal and Anambra State Government.

Continuing, he said the stakeholders' conference will go a long way to not only sensitize the public on the usefulness of the Inland Port but also open up avenues to improve the people's welfare, adding that the River Niger which stretches some 572 km inland have been witnessing some commercial activities in which some companies have engaged in cargo movement, passenger ferry , oil transportation etc through Port Harcourt , Onitsha and up to Baro in the Niger Confluence.

The Minister strongly expected that the outcome of the conference would in the next few months be collated and put the port into full business engagement and maritime services.

In a remark, Governor Peter Obi of Anambra State represented bis Deputy Governor, Engr. Emeka Sibeudu described the event as another added value to the state adding that it will create employment, generate revenue as well as attract other related investments to the commercial city even as he recalled that the state government had created an enabling environment to encourage investors and the establishment of industries.

He assured of the state governments commitment to realize the economic use of Onitsha Port, reiterating that the port would serve Anambra and the Federal Government.