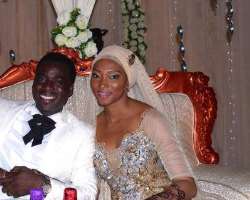 Journalists In SSS Custody In Abuja

The State Security Service, SSS has continued to hold on to the duo of Moji Danisa and Ogbeni Olawale Dawodu, publishers of wave making weekly political Tabloid, Paparazzi, who were invited for questioning by the security agency earlier today.

The SSS had, through one of its officials extended an invitation to Mistress Moji Danisa and Olawale Dawodu to honour an invitation with the SSS ADIS on Thursday the 6th of February, 2014.

Though no reason was given for the invitation and questioning by the SSS, it is however believed to be because of a publication titled GULAK THE GARRULOUS, in apparent reference to the Special Adviser to President Goodluck Jonathan on Political Matters.

All effort to get in touch with them has proved abortive, as their phone lines have remained permanently switched off.
Paparazzi Magazine, from inception, has been in the forefront of holding politicians and political office holders accountable for their actions in and out of office.

Though the magazine and its staff have been harassed on several occasions, leading to the adoption of “nomadic journalism” for months, this is the first time its publishers will be invited officially for questioning by the SSS.