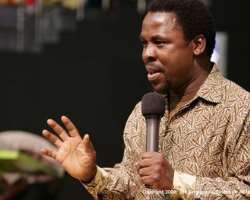 In an interview with The Spectator of Nigeria, TB Joshua has played down his role in the Satellites historic World Cup victory last week, explaining he is a mere mouthpiece and the glory belongs to God alone. Interestingly, his comments are reputed to have been made on Sunday, before the controversy exploded throughout Ghana in which claims were made the Nigerian Pastor ascribed the glory to himself.

“The coach called me in the morning of the battle in Egypt and said I should join them in prayers,” Joshua told The Spectator. “I considered this as a great honour because there are many great men of God in Ghana that had also been standing in the gap for the team. And I was one of these called to join in prayer for the team. There are great men of God in Ghana. We are all prayer warriors.”

Prophet Joshua would not want anyone to ascribe any power to him over his reported intervention during the match against Brazil. “The secret is that there is no way I will come out and say we will win. But what I can do, as a man of God, is to seek the mind of God concerning any situation and interpret the mind of God correctly without removing or adding anything. That is the work of prophets – to deliver God's message as you receive it,” he said, painting a different picture to the publicity-mongering image portrayed by some Ghanaian media-houses.