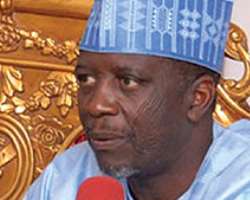 
A day after he conferred with his Kano State counterpart Ibrahim Shekarau on the crisis within the All Progressives Congress (APC), former governor of Sokoto State and founding member of the party, Attahiru Bafarawa yesterday defected to the ruling People's Democratic Party (PDP). Since the G-5 PDP governors moved to the APC and the party's handing over the state leadership to them, Bafararwa, Shekarau and others in Kano, Adamawa, Sokoto and Kwara states have protested the action. In a text message confirming Bafarawa's defection with his supporters to APC, his media aide Alhaji Yusuf Dingyadi said the decision was the outcome of an extensive indoor meeting with Shekarau and others on Friday. 'Bafarawa's political associates along with his supporters and other leaders of ANPP, CPC, and ACN (Legacy Parties) across 23 local governments of Sokoto State endorsed leaving APC to PDP today (yesterday) after meeting with former governor Shekarau. Former governor Bafarawa accepted the resolution and blessed it with allowing the defection to PDP,' he said. A sister publication, LEADERSHIP Weekend had yesterday reported that Bafarawa and Shekarau had expressed lack of confidence in the APC leadership after a meeting in Sokoto on Friday.

PDP, APC divide Obasanjo's men in Ogun As political realignment intensifies ahead of the 2015 general elections, loyalists of former president Olusegun Obasanjo are divided over whether to remain in the PDP or defect to the APC. Sources at a meeting of Obasanjo's loyalists convened to deliberate on their future at the Olusegun Obasanjo Presidential Library (OOPL), Abeokuta on Friday night disclosed that the party members were polarised along the PDP and APC when a motion was moved to decamp. LEADERSHIP Sunday learnt that the motion to join APC was moved by the Ogun East Senatorial chairman, Otunba Tayo Ajayi and was seconded by another elder from Ogun West zone, Chief Sina Adejobi. But a counter motion was moved by a former member of the House of Assembly, Johnson Fatoki, before the motion was put to vote. Fourteen party chairmen of the state's 20 local government areas and two serving members of the House of Assembly, Job Akintan and Abiodun Akovoyon, countered the motion to defect to APC. At the end of the meeting, the two groups were advised to continue with negotiation at their respective ends. A PDP leader, Chief Sunday Alawode, confirmed that the meeting of party members sympathetic to Obasanjo. Alawode said the PDP caucus was opposed to any decision to negotiate with APC. He added that the party faithful resolved to cooperate with the PDP new national chairman Alhaji Adamu Mu'azu in the task of moving the party forward. Alawode said: 'Yes, a meeting was held and someone moved a motion that we join APC and the motion was countered; 14 local government chairmen and all political functionaries were not in support of the move and since Chief Obasanjo has made it clear that he will stay in PDP, we stand by him on that decision. 'We congratulate the new national chairman of our party and we believe in his ability to reconcile the party in South West and Ogun State in particular. We also support President Godluck Jonathan's 2015 presidential ambition and we are ready to work for his success.' – Leadership News