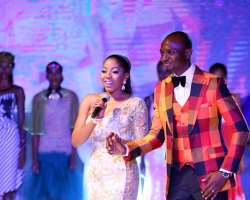 Much has been said about the success of the 2013 edition of the Music Meets Runway tagged 'Iconic 'edition held last year on the 21 December in Eko Hotel and Suites, Victoria Island, Lagos, but Jennifer Olize, CEO Le Reve Events, organizer of Music Meets Runway will not let the past pass without showing her gratitude to sponsors, partners, audience and those who made the show an outstanding success.

Jennifer Olize was full of thanks, “I am indeed grateful to everyone who made Music Meets Runway 2013 a success. We had an amazing group of partners that were very supportive, and I can't thank you enough. A fashion show is never complete without a huge runway statement, the event planner and decorators brought my vision to life, I was totally impressed and awed by the absolute professionalism. We had a fantastic group of designers who worked so hard to showcase their array of styles and trends for the future of fashion. The models were not afraid to step out in faith and pour their hearts out on the runway. I am so proud of everyone involved and also to the audience members who made that extra effort to come early and support us. I am the luckiest person to be able to relate to so many people from all walks of life.”

Last year, the third edition of Music Meets Runway held with media personality IK Osakioduwa and American reality TV star and fashion designer Angela Simmons as hosts; it was worth its weight of gold.

The models showed off their most exquisite pieces, as music icons performed on stage. Icons like Femi Kuti, who performed for the collections of Deola Sagoe, Tuface Idibia and music legend Victor Olaiya, sang their remix of an original song by Sir Victor while models from the Ituen Basi collection stole the audience hearts. Praiz with a voice so smooth sang for the Mai Atafo collection that started with James Bond theme and ended in military wedding that took most breaths away.

The Koko Master; Dbanj, serenaded the models of Lanre Da Silva as they walked side by side. Wizkid got the crowd jumping up and down as only he knows how. Performance from our leading ladies; Lola Rae, Seyi Shay, Tiwa Savage and Toni Tones turned the stage to dynamite with cloud of smoke in their wake.

There was a special appearance on stage by London-bred supermodel, Alek Wek, who introduced one of the show's headlining designers Deola Sagoe. The South Sudanese British model then surprised guests when she brought her expertise to the runway as she modeled one of Sagoe's collections.

The event was rounded off on a high note as young and talented designer April by Kunbi was awarded the 'Rising Icon of the Year'. The title according came with the prize money of N3, 000, 000 (Three Million Naira). She also gets an automatic chance to showcase at MMR 2014. Kunbi beats nine other nominees for the award.

Jennifer Olize also extends her appreciation “I am so proud of everyone involved and I hope that you are part of this event as a sponsor, organizer and audience, each and every year. If you were one of the lucky ones to experience this spectacular event last year, just know that this year will be better. If you weren't there, I hope you come this year to witness history in the making.”