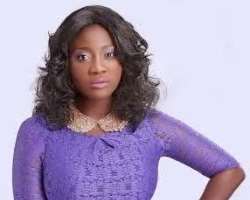 Mercy Johnson, is a Nigerian actress who made her acting debut in the movie, “The Maid” in which she played the role of a possessed house help. Her performance in the movie shot her into the limelight and has acted in other major movies ever since. Mercy Johnson reveals she got into the Nigerian movie industry (Nollywood) because she failed her Jamb exam.

She got married in the year 2011 to her heartthrob, the actress is known for her hips and beautiful shape before she got married, after she gave birth to her first daughter Purity, she gained some weight, but she sure know how to handle that and just recently Mercy Johnson Okojie showed off some photos of her posed with her baby she reduced her after birth weight drastically. Just few days ago the actress did her first photo shoot since she gave birth to her baby , she looks radiantly beautiful and sexy, I guess she has been doing some gyming lately, kudos to her new shape More pics when you continue.