Obiano Receives Certificate Of Return From INEC, And Thanks Anambrarians 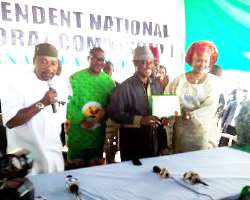 All anxieties surrounding the emergence of APGA gubernatorial candidate, Chief Willie Obiano as the Governor Elect of Anambra State have now been rested with the presentation of the Certificate of Return to him on Monday by the Independent National Electoral Commission (INEC).

In a brief ceremony at the INEC Office in Awka, the INEC Commissioner in charge of Anambra, Kogi and Enugu States, Dr. Lawrence Nwurukwu who handed the certificate to the Governor-elect expressed happiness with the peaceful conclusion of the electoral process that has produced the new governor-elect of Anambra State.

Dr. Nwurukwu expressed surprise at the misleading noise in the media which has created the erroneous impression of unrest in the state and commended the people of Anambra State for compucting themselves in a manner that made it possible for INEC to conduct a very peaceful, free and fair election in the state.

“The people of Anambra State have shown the rest of Nigeria how to compuct themselves during elections. Anambra has demonstrated a level of civility that other states would do well to emulate,” Dr. Nwurukwu observed urging Nigerians to disregard the misleading noise in the media on the general conduct of the election and the state of affairs in Anambra State afterwards.

Receiving the certificate along with his adorable wife Ebele, the Governor-elect, Chief Willie Obiano explained that he regarded the Certificate as the symbolic call-to-serve.

According to him, after 8 years of superlative performance under governor Peter Obi, he and his deputy, Dr Nkem Okeke were aware that they had come into a great heritage of excellence and would do their best to preserve it with a superior performance.

“We have evolved a comprehensive plan for the accelerated development of Anambra State in line with the highly successful model of governance that the current administration has put in place. We will ensure that there is no break in the wonderful job and policy direction that has brought so much joy to our people under Governor Obi,” he assured.

The Governor-elect further appealed to his political opponents who contested the election with him to join hands with him and build Anambra State. “The days of fighting are over. Work has just started and we need everybody's prayers, assistance and support to be able to deliver on your expectations,” he explained.

According to him; “No one must be left out of our calibrated march to greatness. A state is as great as its people. With the calibre of human capital in Anambra State, we can and should reclaim our position as the light of the Nigerian nation.”

The Governor-elect of Anambra State also expressed his profound gratitude to the incumbent Governor of Anambra State, Mr. Peter Umeh for his unflinching support throughout the election campaign period and thanked the National Chairman of APGA for his deft handling of the entire campaign operations that eventually handed victory to the party.

He also thanked the Independent National Electoral Commission (INEC) for conducting the most peaceful, free and fair election in the history of the state and commended the President for providing a secure environment for the election that enabled the people to exercise their civic rights.

Earlier in his remarks, the National Chairman of APGA, Chief Victor Umeh had commended INEC for doing an excellent job with the Anambra poll. Reacting to the controversy generated by the opposition on the general outcome of the poll, Chief Umeh argued that in spite of the uproar it was clear to everyone that INEC scored at least 95 percent in the exercise.

Giving a breakdown of his submission, Chief Umeh said; “Let's leave 5% as our margin of error. Anambra has 21 local government areas. At the first ballot, elections were successfully held in 20 local governments and Idemili North which required a Supplementary Election is only one local government. If you add it, you will see that Idemili North is less than 5% of the places that INEC did a good work.”

Consequently, the party chieftain commended the INEC Chairman, Prof. Atahiru Jega for doing an excellent work. “He should not be intimidated by people who lose elections. Democracy is about how the votes of the people decide who wins an election. Anybody who loses should accept the wish of the people. And that's what has happened. Nobody should harass him. One thing Nigerians should give to Jega is his passion and sincerity of purpose to make INEC the best electoral commission in Africa. Nobody can take that away from him. With the type of planning you have done in Anambra State, I am sure, 2015, you will succeed.

Chief Umeh also commended INEC for creating a level playing field for all parties in the country irrespective of size, pointing out that APGA did not feel intimidated in participating in the Anambra poll even with its obvious disadvantage in terms of national spread.