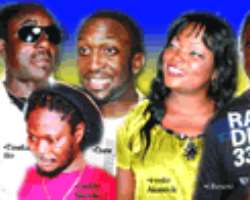 War of words as GUS unveils celebrity showdown
By TOSIN AJIRIRE and WOLE BALOGUN
Saturday , March 6, 2010
It was a battle of the stars at the unveiling of the new reality TV show, Gulder Ultimate Search: Celebrity Showdown held at the Oriental Hotels, Lekki, Lagos last week. Virtually all the 10 contestants including Daddy Showkey, Muma Gee, Funke Akindele, Bob Manuel-Udokwu, Princess, Obesere, Dare Art-Alade, Emeka Ike, Chioma Chukwuka and Weird MC engaged one another in a hot war of words that prepared the ground for what's in store for television viewers when the show powered by Nigerian Breweries Plc debuts next month.

Beating his chest, ghetto soldier Daddy Showkey had boasted that none of the contestants can beat him to the ultimate prize of N7.5 million because of his vast experience 'in the jungle of Ajegunle'.

Responding, Bob Manuel, who has been the anchor of Gulder Ultimate Search in the last two years, said his only challenger among the lot is perhaps Weird MC because 'she's weird.'

While busty comedian, Princess said she will deploy her big boobs as 'natural weapons' against the male contenders, fuji singer Obesere pledged that as Chairman of Fuji Musicians Association of Nigeria (FUMAN) he will not disappoint his members, adding that, boobs or no boobs, the grand prize is his for the taking.

The celebrities will not be given a five star treatment as they will go through difficult tasks in different terrains as the main GUS.'

Anchored by Genevieve Nnaji, the show will run for 11 weeks on AIT, NTA network, STV, Africa Magic, Soundcity (DSTV) and other stations as an original Nigerian adventure programme with international standard, while the reward at the end of the day will be more fame, more fortune and much more for the last celebrity standing.

Blockbuster further learnt that only one celebrity will win the ultimate price but every participant will take home a prize according to their eviction.