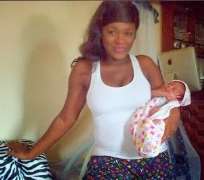 Few weeks ago, sultry up and coming actress, Chacha Eke welcomed her first child. The beautiful actress, shortly after her marriage in 2013, went into labour and was delivered of a bouncing baby girl.

Less than a month after the child birth, the role-interpreter has shown off her pretty baby. From the picture, it shows she has lost some weights and now looking more pretty than she was before now.