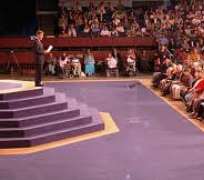 
The teachings of televangelist Kenneth Copeland and his family focusing on the virtues of trusting God to keep healthy are under scrutiny after a cluster of measles cases linked to his family’s North Texas megachurch revealed many congregants hadn’t been vaccinated against the highly contagious disease.

Kenneth Copeland Ministries has won supporters worldwide through television programs, crusades, conferences and prayer request networks. He was a pioneer of the prosperity gospel, which holds that believers are destined to flourish spiritually, physically and financially.

Although church officials were quick to act after the outbreak - including hosting clinics in August where 220 people received immunization shots - and have denied they are against medical care or vaccinations, people familiar with the ministry say there is a pervasive culture that believers should rely on God, not modern medicine, to keep them well.

Health officials say 21 people were sickened with the measles after a person who contracted the virus overseas visited the 1,500-member Eagle Mountain International Church located on the vast grounds of Kenneth Copeland Ministries in Newark, about 20 miles north of Fort Worth.

Of the 21 people who contracted measles linked to the church, 16 were unvaccinated. The others may have had at least one vaccination, but had no documentation.

Symptoms of the measles, which is spread by coughing, sneezing and close personal contact with infected people, include a fever, cough and rash. Those infected are contagious from about four days before breaking out into the rash to four days after.

The Centers for Disease Control and Prevention recommends that children get two doses of the combined vaccine for measles, mumps and rubella, called the MMR. The first dose should be given when the child is 12 to 15 months old and the second at 4 to 6 years old.

During an August 2010 broadcast, Copeland expressed shock at the number of vaccinations recommended for his great-grandchild.

“I got to looking into that and some of it is criminal. … You’re not putting - what is it Hepatitis B - in an infant! That’s crazy. That is a shot for a sexually transmitted disease. What? In a baby?” he said. “You don’t take the word of the guy that’s trying to give the shot about what’s good and what isn’t. You better go read the can or read the thing - find out what’s going on there and get the information on there because I’m telling you, it’s very dangerous the things that are happening around us all the time.”

His wife Gloria bragged during a conference that she and her husband don’t need prescription drugs, adding that the Lord heals all diseases.

Robert Hayes, risk manager for the ministries, denied that the church’s teachings ever have advised against immunizations and noted the facility includes a medical clinic staffed with a physician.

Ole Anthony, president of the Dallas-based religious watchdog group Trinity Foundation, said that while there might not be specific guidance on topics such as vaccinations, the views of the leadership are clear.

“The whole atmosphere is to encourage them to have faith, and it’s no faith if they go to the doctor, that’s the bottom line,” Anthony said.

In a sermon posted online following the outbreak, Copeland’s daughter, Terri Pearsons, who is a senior pastor at Eagle Mountain along with her husband, encouraged those who hadn’t been vaccinated to have it done, but added that if “you’ve got this covered in your household by faith and it crosses your heart of faith, then don’t go do it.”

In a statement denying that she opposes vaccinations, she added the concerns they had had were “primarily with very young children who have a family history of autism and with bundling too many immunizations at one time.”

A fear of the MMR vaccine can be traced to a now-discredited paper published in 1998 by British researcher Andrew Wakefield and colleagues that suggested a link between autism and the combined childhood vaccine for MMR. Repeated studies since have shown no connection, the paper was eventually rejected by the journal that published it and Britain’s top medical board stripped Wakefield of the right to practice medicine.

“We do know how to effectively prevent measles. We do know that and so a choice not to do that, to put a child at risk is just an unsupportable, an unconscionable choice. And in addition, you put others at risk,” said Dr. Paul Offit, chief of infectious diseases at the Children’s Hospital of Philadelphia.

Arden, who attended church at Eagle Mountain from 1997 to 2003 and worked at the ministries for three years, said the distrust of vaccines was so pervasive that her daughter, who as an 11-month-old was up to date on her immunizations when they joined the church, didn’t get any others until they left.

“We were terrified to have any sort of fear. And anything that wasn’t faith in God was fear,” said Arden, 35, who now lives in New York City.

Kristy Beach, 41, said that because of the ministry’s teachings, her mother, Bonnie Parker, refused to see a doctor, even as her cancer advanced rapidly. After Parker died in 2004 at age 59, Beach found her mother’s diaries, which detailed the words of Kenneth and Gloria Copeland she’d heard on television in her home in Winnsboro, La.