IGP: No more room for corrupt officers in police 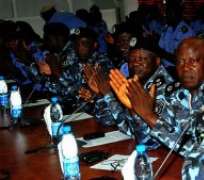 
The inspector general of police, Mr Mohammed Abubakar,  has vowed to fish out all the bad eggs in the police.

Abubakar advised corrupt police officers in the country to begin to search for new employment elsewhere.

Addressing participants at the second conference of heads of zonal and state criminal investigation departments in Abuja, Mr Abubakar restated that all corrupt officers will be shown out of the Nigeria police.

The inspector general of police, Mohammed Abubakar restated the need for police officers to be disciplined and to live above board.

The deputy inspector general of police in charge of investigation, Mr Peter Gana,  also spoke on his expectations of the conference.

The conference which has the theme, keeping up with new trends in investigation and prosecution of cases, is expected to help in reducing the number of unresolved criminal cases in the country.

The inspector general also stressed the need for diligent investigation and prosecution of cases by police officers.

The Police Boss, who has been sounding this note of warning to the officers since his inception as the IGP,went farther than warning on the issue of corrupt police officers when a police officer was caught on a video footage soliciting for inducement from an unknown motorist. The officer has however been dismissed from the force.