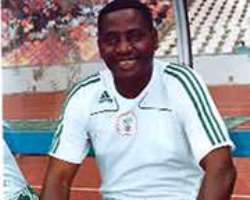 The sad news was initially reported last week that Best Ogedegbe was lying unconsciously, but now the reality has finally come, as the Nigeria former Green Eagle number one goal keeper on Sept 29, gave up the ghost at the University College Hospital (UCH), Ibadan where he was diagnosed of brain tumour. He was 55 years old.

Facts available to modernghana have it that the former national goalkeeper was brought to the UCH for corrective eye surgery; the doctors diagnosed him of brain tumour in the course of treatment. Head of the UCH Public Relations team, Toye Akinrinlola, said the college did its best to save the former goalkeeper, but his time was up.

According to Toye: "He came in here for surgery last week. People said they knew he had an eye problem and he had a successful eye surgery. Medical experts propounded that brain tumour can lead to blindness. It was not a medical problem that developed only when he got here. We did our best for him. We deployed the best life-saving machine on him and at a point the Chief Medical Director, Prof. Femi Ilesanmi, told the Chairman Medical Advisory Committee (CMAC), Dr Adeniyi Adenipekun, who is his deputy to mobilize the best clinical services for him.

"We did our best for him but God has another plan and the plan of God overwhelmed that of us human beings."

In a condolence visit to the deceased family the Oyo State Commissioner for Sports, Joe Makanjuola, on behalf of the Oyo government expressed shock saying his death was the last thing the nation's soccer family was expecting at the moment."

Makanjuola said Governor Adebayo Alao-Akala paid the deceased's hospital bills at the UCH when there was no hope on how to raise the fund. Already, the commissioner said, he had notified the Nigeria Football Federation (NFF) of the goalkeeper's death.

General Manager of Shooting Stars football club (3SC), Mutiu Adepoju, described the demise of Ogedegbe as a sad one, saying although he was aware of his sickness, he never envisaged death for him.

"I was there by his sick bed shortly before his transition and never thought he would die. I left for home only to wake up to hear the news of his death. It is a great loss to Nigerian football and to the family," Adepoju said.

Modernghana can further confirm that Dolphins of Port Harcourt coach, Stanley Eguma, who worked with Ogedegbe last season before the 3SC former star moved over to Sharks for the 2009/2010 season, described the demise of the former goalkeeper trainer as a blow to Nigerian football.

He described the late coach as a disciplined and diligent person, whose experience contributed to the promotion of Dolphins to the Premiership.

"We were shocked at Dolphins because we never expected such news at this point in time. He was part of the coaching crew, especially in the area of goalkeeping that ensured that the team returned to the Premiership. When he came to Dolphins, many people expressed doubt whether he would be able to adjust, but he blended easily and became an important part of the team.

"He took his job seriously and he was also friendly because he was the kind of person you can easily relate to if you are meeting him for the first time. The entire Dolphins family is sad about his death and we pray that God will give the family the fortitude to bear the loss," Eguma said.

On Ogedegbe's movement to Sharks, Eguma said: "He was transferred to Sharks on a temporary basis because the team was having problems in the area of goalkeeping and he was expected to go there and assist. We at Dolphins were expecting him back soon and we were shocked to hear that he is no more.

"Nigeria will miss his wealth of knowledge because he exhibited lots of experience in the area of goalkeeping, which I feel would still have been useful for the country."

Ogedegbe was one of the heroes of Nigeria's first victory at the Africa Cup of Nations, which the country hosted in 1980. Then playing for IICC Shooting Stars of Ibadan, Ogedegbe was preferred by Brazilian Coach, Otto Gloria, to the regular number one keeper, Emma Okala, for the Nations Cup. Four years earlier, he was part of the Shooting Stars team that won Nigeria's first continental trophy, the African Cup Winners' Cup in 1976.

He left Shooting Stars for Abiola Babes of Abeokuta in 1982 and retired from the game four years later. Among the teams he worked for are Wikki Tourists of Bauchi, Dolphins, and Sharks, as well as the national U-20 team, the Flying Eagles.

However, with this recent irredeemable lost in the instance of Ogedegbe, Nigerian government need to come up with gainful plans with the objective of adding value to the lives of all living legends in the country who are seemingly lying below poverty line, despite their years of meritorious service to their fatherland during their youthful and active years. Indeed Ogedegbe demise will be felt in Nigeria's sport circle, especially in the game of football.