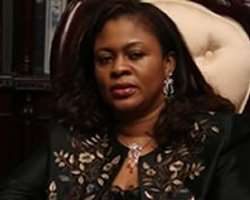 ABUJA, July 28, (THEWILL) – The House of Representatives has said it has uncovered an alleged multi billion naira scam in the Ministry of Aviation, with the Minister, Princess Stella Oduah –Ogiemwonyi, allegedly involved.

Chairman of the House Committee on Anti-Corruption, National Ethics and Values, Hon. James Abiodun Faleke, who made these allegations in Abuja disclosed that his committee would begin an investigation into the alleged scam.

Faleke lamented that it was unfortunate that the Aviation minister had to allegedly abuse her powers at the expense of Nigerians.

According to him, the Aviation Minister, in connivance with some other ministers in the federal executive council (FEC) allegedly took advantage of the loopholes in the public procurement law and are feeding fat allegedly using their own companies.

“If I tell you, the Aviation Ministry that we are probing, we went to corporate affairs commission (CAC) and found out that most of the companies handling the contracts awarded are all owned by ministers. Even if that is the only thing we would achieve in this House, we would expose everybody involved in this aviation corruption,” he alleged.

He said “It is all about impunity with which we do things in the country. We are actually looking into the Bureau of Public Procurement (BPP) law that allows this BPP to give no objection certificate. All agencies are using this loopholes of no objection certificates to issue contracts of N20 billion without advertising it through selective tendering.

“For instance, we have this particular contract awarded to MS I- Security Nigeria Limited on 20/09/2012. The contract is to provide new security strategy for airport at the cost of N9.4 billion and they have paid N6.247 billion to this contractor. This is just one out of about 100 cases. The issue is this, what is new security strategy?

“So when they say Aviation is working, the issue is at what cost? And then you see a contractor that is asked to renovate Enugu airport is the same contractor that is asked to renovate Port Harcourt airport and Kano airport – they are the same contractors. And these are contractors without pedigree. Just recently, at the Arik terminal in the Lagos airport, a passenger fell about two weeks ago and died. When you come to our Abuja airport, if you are not careful with the shoes you put on, if you step on the floor, you are gone”.

However, in a swift reaction, the minister through her Special Assistant on Media, Mr. Joe Obi, dismissed the allegations, insisting that all contracts followed due process.

He said “ The attention of the Federal Ministry of Aviation has been drawn to allegations in some quarters to the effect that contracts for the remodelling of the nation's airports did not follow due process.

“Nothing can be further from the truth.
To be sure, all contracts in the Ministry for the remodelling of the airports and other critical infrastructure/equipment followed all due processes prescribed by the relevant law-the Public Procurement Act 2007.”

Obi added that “It would be misleading to insinuate that contracts awarded through a selective tendering process, as is the case with some contract awards in the Aviation did not necessarily following due process. It has to be noted that selective tendering is a lawful procurement procedure as enunciated in the Act.

“The question as to why the Ministry opted for the selective tendering option is obvious. The present administration met aviation infrastructure, especially the terminals in a terrible state of dilapidation.

Understandably, a State of Emergency of sorts with regard to rehabilitating the derelict and decrepit infrastructure required a lot of urgency which the selective tendering provision in the Act suited quite aptly”.

According to him, “On the allegation that a certain security contract was awarded sometime in December, yet work has not commenced needs some clarification. One, security related contracts are not subject to open competitive bidding in order not to compromise the entire process.

“Secondly, the security equipment required and ordered by the Ministry is not an off-the shelf item. The equipment is to be custom-made and manufactured specifically to suit our purposes. Letters of Credit have been opened for this contract and there are currently being manufactured. Soon, the equipment will be delivered for installation.

“We also make haste to re-state that all contracts in the Ministry were awarded in accordance with the provisions of the Public Procurement Act and accordingly received Certificates of No Objection from the Bureau of Public Procurement. Any allegation to the contrary or an insinuation of corruption on the part of the Ministry is patently false and misleading”.