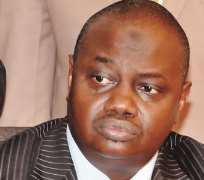 SAN FRANCISCO, July 18, (THEWILL) – The chairman of the Economic and Financial Crimes Commission, EFCC, Ibrahim Lamorde Thursday reiterated the importance of the support of the European Union to the Commission in the fight against economic and financial crimes. Lamorde made this assertion while receiving members of the Africa, Caribbean and Pacific/European Union (ACP-EU) parliament in his office.

The ACP-EU parliamentarians who were in Abuja for the 10th ACP-EU Regional (West Africa) meeting said they were in the Commission to see for themselves the impact of the EU assistance on its operation. Lamorde told the visitors that the Commission received about $24.7 million as support from the EU. According to him, the funds enabled the EFCC to build its ultra modern Data Centre, Forensic Unit, deploy modern software packages including Go-Case which have enabled the Commission record significant impact it its enforcement activities in Nigeria. “EFCC would not have been able to achieve what it has achieved today without the support of the European Union”, he said.

He listed the achievement of the Commission to include the recovery of over $9 billion, secured over 400 convictions as well as getting Nigeria de-listed from the infamous list of non-cooperative countries by the Financial Action Task Force, FATF. He said apart from being able to investigate and prosecute criminals, the Commission through the support of the EU also engaged the civil society groups and faith-based organization to buy in and own the fight against economic and financial crimes.

However, despite the achievement recorded so far, Lamorde listed some of the challenges faced by the Commission to include manpower development and prosecution of criminals.

Numbering over 40 members, the group led by its co-presidents, Honourable Dr. Joyce Laboso, deputy speaker, Kenya and Riviasi Hideile, were later taken on tour of the Commission’s Data Centre and the Forensic Unit which were established with EU assistance.