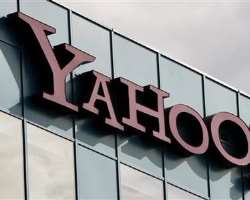 Yahoo's shares were up 3 percent at $27.60 after at least seven brokerages raised their price targets on the stock even after the company trimmed its revenue forecast on Tuesday.

Barclays Equity Research, Stifel Nicolaus, JPMorgan Equity Research, Evercore Partners, RBC Capital Markets, UBS and Topeka Capital raised their price targets on Yahoo's stock by as much as $8, with a top price of $34.

Several analysts noted that while Yahoo's core business grew only moderately in the first quarter, revenue at 24-percent-owned Alibaba increased by 71 percent to $1.4 billion.

At least four brokerages raised their valuation on Alibaba, widely expected to go public later this year, to as much as $120 billion, higher than the $100 billion valuation put on Facebook Inc before its IPO. Yahoo has a market capitalization of about $29 billion.

"We continue to think that the defining factor for Yahoo stock is the value of Alibaba," Bernstein Research analyst Carlos Kirjner said in a note.

Evercore, which raised its valuation on Alibaba to $120 billion from $90 billion, said nearly half of Yahoo's valuation is due to its stake in the Chinese company and only a quarter can be attributed to its core business.

"For most, the Yahoo story will not change given strength in Asian assets," said JPMorgan analyst Doug Anmuth, "but core Yahoo challenges serve as a reminder that turning Yahoo into even a modest growth business will likely take some time."

The biggest blot on Yahoo's second-quarter results was an 11 percent drop in display revenue to $432.1 million due to lower prices and a shift to international markets.

Yahoo, in a live stream event akin to a TV newscast with Mayer and CFO Ken Goldman playing news anchors, acknowledged that there was pressure on prices but said Yahoo was developing new ad formats and technology that would reverse the trend.

"We think investors should give the management team the benefit of the doubt as it is unrealistic to expect a turnaround of such a challenged business in 12 months," Bernstein's Kirjner said, referring to Mayer's appointment last July.

Yahoo has been buying companies to bolster its mobile and social presence. It announced nine acquisitions in the second quarter, including a $1.1 billion deal to buy Tumblr.

"With a new management team and a renewed focus on products, we think YHOO! has the potential to become a classic 'Net turnaround story," RBC analyst Mark Mahaney said in a note.