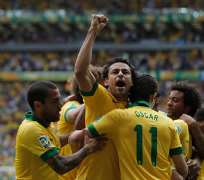 Luiz Felipe Scolari believes victory over world champions Spain in the Confederations Cup final in Rio de Janiero on Sunday will show the world that Brazil are ready to win the 2014 Fifa World Cup.

Brazil have not lost a competitive match on home soil since a defeat to Peru in 1975. Brazil coach Scolari said that record and the belief and support of the fans meant Spain are not automatic favourites at the Estadio Maracana.

"Victory will send a message that Brazil are on the right road to win the World Cup," he said. "Even if we don't win but play well and show we are in good shape, it will also send a message.

"I do not consider Spain strong favourites. In the past six years, they have won two European Championships and a World Cup.

"Spain are spectacular - but like any team they have their faults.

"They have played with a settled team and that is an advantage. But with strength and spirit we can match them and even go beyond them."

Scolari spoke of the need for his team to win over any remaining doubters in Brazil, having been at the centre of so much criticism in the weeks before the Confederations Cup.

"Victory will challenge those in Brazil that doubt us," he said. "My players are very motivated, we want to make ourselves respected at home.

"The fans have been fantastic from the (2-2) match against England at the Maracana. They have given us a huge confidence boost."

Scolari did, however, talk up the achievements of the two-time European and world champions, claiming they were strong favourites but insisted that Brazil had the talent to win.

"In the last six years they won two European Championships and World Cup. They have played with a same team and have an advantage. They may be stronger, but we can win."

Much has been made of Brazil's move away from flair and fluency towards a more functional approach, but Scolari said history only remembered results, not how you got them.

"Brazil played pretty [at] a World Cup (1982) and did not win," added Scolari. "We sacrificed the result by the spectacle. The Spain team has been playing well and winning. Everybody wants that, but sometimes it is not possible. The result is the story, not the beautiful game."

Scolari said he would not restructure his side to cope with the threat of Spain, after Italy frustrated them by playing three central defenders. Instead, Brazil are expected to name the same side that overcome Uruguay 2-1 in Belo Horizonte on Wednesday.

"I am highly satisfied, and for all of us this is something very beautiful. We are playing Brazil, the kings of football who have lived through marvellous moments in their football history, and to play in Maracana is something very special.

"I am delighted we are playing the final here and perhaps we can come back and play the World Cup final here as well in 2014."