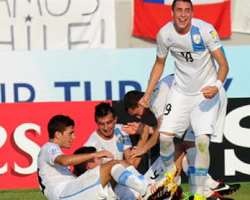 Uruguay defeated Uzbekistan 4-0 to secure a place in the Under-20 World Cup knockout stage on Saturday.

Gino Acevedo scored with a low 25-metre shot in the 38th minute, and Nicolas Lopez, Giorgian de Arrascaeta and Ruben Bentancourt added in the second half.

Uruguay finished Group F second to Croatia, and will take on Nigeria in the playoffs. Uzbekistan also advanced as one of the best third-placed teams and will meet Greece.

Croatia, already qualified, beat New Zealand 2-1 with goals from Stipe Perica and Ante Rebic. Louis Fenton scored New Zealand's only goal in the tournament from the penalty spot in the 84th.

Iraq beat Chile 2-1 to win Group E. Both teams were already through to the last 16. Iraq will face Paraguay, while Chile is up against Croatia.

Egypt beat England 2-0 and finished third but came up one goal short of advancing. Instead, Ghana went through to the first knockout round as the 16th and last team because of a better goal difference and will play Portugal.

England hasn't won a match in the competition since 1997, and stretched its winless streak to 17 games.

England dominated the match but was thwarted by poor finishing and strong saves from Egypt goalkeeper Awad Mossad.

Trezeget gave Egypt the lead in the 79th, and Ahmed Hassan doubled the score in injury time.

The U20 World Cup continues on Tuesday with the first four matches of the knockout stage, including tournament favourite Spain against Mexico.