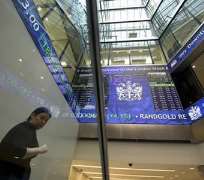 The U.S. central bank's plans to scale back its stimulus and fears Chinese policy may be tightening sent the dollar sharply higher on Monday, while world shares extended last week's dismal performance.

The sell-off in stocks, bonds and commodities since the Federal Reserve signaled an end to the era of cheap money that has fuelled record rises in asset prices is seen having further to run.

"The prospect for a disorderly transition is there," said Josh Raymond, market strategist for City Index.

Fears of further market turmoil have been exacerbated by worries over China's growth outlook and the health of its banks after the country's central bank said liquidity in its financial system is "reasonable", despite high short term rates.

Amid the selling, yields on 10-year U.S. Treasury notes, a benchmark for global rates, hit a two-year high of 2.57 percent on Monday, supporting the dollar which added 0.4 percent against a basket major currencies to 82.66 .DXY

In share markets, MSCI's broadest index of Asia-Pacific shares outside Japan .MIAPJ0000PUS fell 1.8 percent to its lowest since early September. However, a bumper takeover in the telecoms sector helped European shares, with the FTSE Eurofirst 300 index .FTEU3 of top shares down just 0.2 percent.

Data from Germany's Ifo institute later which is expected to show a gradual improvement in the euro area's largest economy could also soothe some of the concerns.

Commodity markets were also weaker. Copper dropped to its weakest level in 21 months, while oil slipped below $100 a barrel.