Gulf Of Guinea: President Jonathan to Confer With African Leaders On Piracy 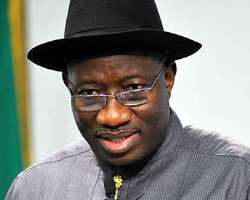 SAN FRANCISCO, June 22, (THEWILL) – President Goodluck Jonathan will travel to Yaounde, Cameroun, on Monday to participate in the Summit of West and Central African Heads of State and Government on Maritime Security in the Gulf of Guinea which opens there on Monday, June 24.

The summit, according to a statement issued on Saturday by the Presidential Adviser on Media and Publicity, Dr. Reuben Abati, has been convened against the background of rising incidents of piracy in the resource-rich Gulf of Guinea.

“Documents to be considered and ratified by Heads of State at the Summit include a Memorandum of Agreement among ECOWAS, ECCAS and the Gulf of Guinea Commission on maritime safety and security in West and Central Africa, the policy statements of the Heads of State and Government on maritime safety and security, as well as a Code of Conduct on the fight against piracy, armed robbery and illegal maritime activities.


“It is expected that at the conclusion of the summit, legal instruments for cooperation on maritime security in the Gulf of Guinea will be adopted by participating heads of state and government.

“The legal instruments and the Memorandum of Agreement on joint prevention and repression of illegal activities in the gulf will establish a concrete basis for the two regional blocs to share intelligence, conduct joint patrols and jointly repress piracy in their maritime domain,” the statement said.


The statement listed those who will accompany President Jonathan to the summit to include the Minister of Justice, Mr. Mohammed Adoke; the Minister of Interior, Mr. Abba Moro; the Minister of Transport, Alhaji Idris Umar; the Minister of State for Defence, Erelu Olusola Obada; the Chief of Naval Staff, Vice Admiral Joseph Ezeoba; and the Director-General of the Nigeria Maritime Administration and Safety Agency (NIMASA), Mr. Patrick Akpobolokemi.

It noted that the President will also hold bi-lateral talks with President Paul Biya of Cameroun on bilateral issues such as border security and the welfare of Nigerians living in that country. President Jonathan is expected to meet with the Nigerian community in Cameroun before returning to Abuja on Tuesday, June 25.