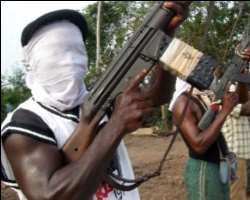 The 21-year-old woman, who got married to her husband only ten days ago, was killed on Tuesday by unknown assailants who strangled her to death.

Sources in Kano said the Director’s wife was assassinated at her Sabon Gandu quarters’ residence around 11am by the assailants who broke into their family house.

Her husband, who confirmed the incident, said his wife who was alone in the house between 10 and 11am on Tuesday morning, was strangled to death by the unidentified assailants .


Spokesman of the Kano State Police Command, ASP Magaji Musa Majiya, while confirming the incident, said some suspects had been arrested even as he explained that investigation into the matter was ongoing.