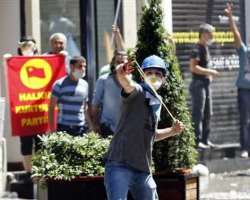 Turkish Prime Minister Tayyip Erdogan made a defiant call for an end to the fiercest anti-government demonstrations in years on Saturday, as thousands of protesters clashed with riot police in Istanbul and Ankara for a second day.

The unrest was triggered by government plans for a replica Ottoman-era barracks housing shops or apartments in Istanbul's Taksim Square, long a venue for political protest, but has widened into a broader show of defiance against Erdogan and his Islamist-rooted Justice and Development Party (AKP).

Police fired teargas and water cannon down a major shopping street as crowds of protesters chanting "shoulder to shoulder against fascism" and "government resign" marched towards Taksim, where hundreds were injured in clashes on Friday.

A police helicopter buzzed overhead as groups of mostly young men and women, bandanas or surgical masks tied around their mouths, used Facebook and Twitter on mobile phones to try to organize and regroup in side streets.

"Every four years we hold elections and this nation makes its choice ... Those who have a problem with government's policies can express their opinions within the framework of law and democracy," he said.

Police later pulled back from Gezi Park in Taksim, where the demonstration started peacefully on Monday with people pitching tents in protest at trees being torn up for the redevelopment.

Waiters scurried out of luxury hotels lining the square, on what should be a busy weekend for tourists in one of the world's most visited cities, ferrying lemons to protesters, who squirted the juice in their eyes to mitigate the effects of tear gas.

"People from different backgrounds are coming together. This has become a protest against the government, against Erdogan taking decisions like a king," said Oral Goktas, a 31-year old architect among a peaceful crowd walking towards Taksim.

MODERN-DAY SULTAN
Stone-throwing protesters also clashed with police in the Kizilay district of central Ankara as a helicopter fired tear gas into the crowds. Riot police with electric shock batons chased demonstrators into side streets and shops.

Protests also broke out in the Aegean coastal city of Izmir late on Friday.

Erdogan said the redevelopment of Gezi Park was being used as an excuse for the unrest and warned the main opposition Republican People's Party (CHP), which had been given permission to hold a rally in Istanbul, against stoking tensions.

But the protests included a broad spectrum of people opposed to Erdogan and were not organized by any political party.

CHP officials called on its members not to take party flags with them to the protests, apparently concerned they would be held responsible for the violence, and party leader Kemal Kilicdaroglu accused Erdogan of behaving like a dictator.

"Tens of thousands are saying no, they are opposing the dictator ... The fact that you are the ruling party doesn't mean you can do whatever you want," he said.

Erdogan has overseen a transformation in Turkey during his decade in power, turning its once crisis-prone economy into the fastest-growing in Europe.

He remains by far the country's most popular politician, but critics point to what they see as his authoritarianism and the religiously conservative government's meddling in private life in the secular republic, accusing him of behaving like a modern-day sultan.

Tighter restrictions on alcohol sales and warnings against public displays of affection in recent weeks have also led to protests. Concern that government policy is allowing Turkey to be dragged into the conflict in neighboring Syria by the West has also sparked peaceful demonstrations.

REASONABLE FORCE
Residents hung out of windows and balconies banging pots and pans in support of the protesters in the streets below.

Medics said around 1,000 people had been injured in the clashes in Istanbul. At least four lost their eyesight after being hit by gas canisters, while four more were being treated for fractured skulls, the Turkish Doctors' Association said.

The U.S. State Department said it was concerned by the number of injuries while Amnesty International and the European parliament raised concern about excessive use of police force.

Erdogan acknowledged mistakes had been made in the use of tear gas and said the government was investigating, but said the police reserved the right to use reasonable force and vowed that the redevelopment plans for Taksim would go ahead.

"Taksim Square can't be a place where extremist groups hang around," Erdogan said of a location which has long been a venue for mass demonstrations.