Abuja May Come For My Life, Says Amaechi 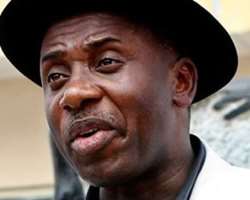 SAN FRANCISCO, May 27, (THEWILL) – Embattled Rivers State Governor and Chairman of a faction of the Nigeria Governors’ Forum (NGF), Mr. Rotimi Chibuike Amaechi, Monday, urged supporters to pray for him saying that some people at the federal level of government may want to kill him.

Amaechi, who was suspended from the ruling Peoples Democratic Party (PDP) by its National Working Committee (NWC), spoke at a youth interactive session, titled: “Consolidating on Rivers of our dreams” held at the banquet hall of Government House in Port Harcourt.

The Governor also accused the NWC of wrongdoing saying he wasn’t given fair hearing before Monday’s decision to suspend him.

“I want to say the way these people at the federal level are acting, they may come for my life, so when you pray, please pray for me,” the Governor said.


While speaking on Friday’s election at the NGF where two factions of the influential forum emerged, Amaechi said, “If we leaders of Nigeria today are refusing to accept the results of a properly organized election, supervised by the Director-General of the Governors’ forum and somebody brought a paper that was signed in April. If you check that list, it was signed in April and you brought it on May 24th after the governors have finished voting their chairman into office…


“There is a rumour that they want to go to court to stop me as NGF chairman. We are ready to meet them in court but they should not go through the backdoor to get an order, ” the governor added.

Meanwhile, the chairman of the splinter faction of the NGF, Plateau State Governor, Mr. Jonah David Jang has commissioned a new secretariat for the forum in Abuja with a Sole Administrator to run the affairs of the forum.