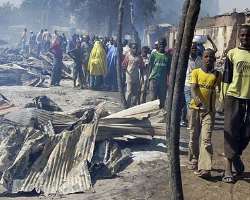 SAN FRANCISCO, April 27, (THEWILL) – Indications emerged on Saturday that the fatality figure in the Baga killings in Borno State may have been under-estimated after all as the senator representing the area in the Senate, Senator Maina Ma'aji Lawan, who is also a former governor of the state, disclosed that the town actually lost 228 persons to the deadly clash between the military and suspected members of the Boko Haram sect.

Lawan, who also said about 4,000 houses were destroyed rather than the 2,000 that was reported in the media, maintained that there was no truth in the claim by the military that about 30 persons were killed in the carnage.

The senator, who insisted that his two-day assessment visit to the border town at the weekend revealed that 228 graves were dug to bury those killed, said he also counted about 4000 houses leveled to the ground after the deadly clash between the Boko Haram gunmen and men of the Multination Joint Task Force (MJTF).

Lawan, a native of Baga, disclosed this while speaking with journalists in Maiduguri, the state capital, saying his people were yet to come to terms with the incident as many have no place to lay their heads and may soon succumb to the impending epidemic.

He said despite the widely reported carnage and destruction of Baga township in the media and on the floor of the National Assembly, there is much more to these reports as the total number of people killed and houses destroyed were more than what is being reported.

According to the senator, the reality on ground in the town is very much higher than 2, 000 destroyed houses, 185 lives, 62 vehicles and 284 motorcycles lost to the clash.

“During my two-day on-the-spot visit to Baga, what I saw was very frightening and sad to report, as many more lives and properties were massively destroyed in the two-day carnage. The houses leveled or torched run for the length of three to four kilometres of the township settlements. I drove through the carnage and counted no fewer than 4,000 houses of innocent residents destroyed in the fight between the Boko Haram sect and soldiers of Multinational Joint Task Force (MJTF).

“The magnitude of carnage has overwhelmed me, and even the assistance from the National Emergency Management Agency (NEMA), Nigerian Red Cross (NRC), the JNL, Izala and other humanitarian agencies in Baga town are grossly inadequate to meet the food, health and housing requirements of victims that are still sleeping in the open air. Even, NEMA as at last Friday had only two tents to cope with tens of hundreds of displaced victims.

“I personally visited all the four grave sites before arriving at the exact number of residents killed in the destruction of Baga town. At the Wayah grave yard, I counted 130 fresh graves, while at the Arewa cemetery, 60 people were buried by their relations. The Magumeri grave yard also had a total of 30 fresh graves while eight others were buried within the town, these bring to a total of 228 people massacred and buried in Baga by their surviving relations last week," he said.

Senator Lawan called on humanitarian agencies and philanthropists to act swiftly to “intervene and assist” the surviving tens of hundreds of Baga victims with food, shelter, medical services and drugs, and shelter by setting up more resettlement camps and water points, as against NEMA’s two tents.

He however warned that there could be an outbreak of both water and airborne deceases if swift response is not made to change the situation on ground in the ravaged community.