WAR AGAINST PIRACY GETS TOUGHER …as NCC apprehends kingpin in Lagos 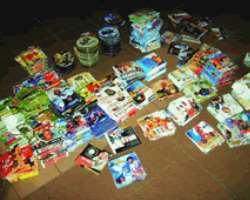 Like a clog in the wheel of progress in the intellectual property world, piracy remains a crime and the bane of economic development. But with the recent arrest of Anthony Onwujekwe, a suspected piracy baron at the notorious Alaba International Market in Lagos, the Nigeria Copyright Commission (NCC) has scored a major point.

It has shown that despite its limitations both at the levels of manpower and finance, it is still capable of nailing the coffin of piracy in any part of the country.

Explaining enormity of the suspect's crime, NCC in a release signed by Vincent Oyefeso listed the impounded pirated CDs and VCDs as Battle Axe, London Fever, Siera Naija, Yori Yori, Tempted to Watch, Restoration Praise and Story of My Life among others. Oyefeso also listed a number of foreign works, mainly assorted Christmas Carols in CD format even as he listed names of affected artistes as Peter Divine Oka (a.k.a Oceanic) Dan Ike, Africa China, X Project, Bracket, P.Square, Gloria Oluchi and Kelechi Edeh also few outfits like NIRA Limited and the Music Label Owners and Recording Industries Association of Nigeria (MORAN) were affected.
In the words of the NCC, the suspect who was on Monday February 1 arraigned at the Federal High Court (Court 15) Victoria Island in Lagos faced a three-count charge of selling 20 thousand infringing copies of musical and film works in CD and VCD formats of various titles.

The works by many artistes, among whom are Battle Axe, London Fever, Siera Naija, Yori Yori have their copyright in favour of Dan Ike Africa China, X Project, Bracket etc. Similarly, Onwujekwe was accused of having in his possession, 20 thousand infringing copies of the same works without the consent or authorization of the copyright owners. He has thus committed an offence contrary to the law and punishable under section 20 (2) C of the copyright Act Cap C28, laws of the Federation, 2004.

According to NCC, the suspect had been under the Commission's surveillance since July last year. He was however, arrested by the Police on November 5, 2009 following a complaint by Mr. Peter Devine Okah at the Ojo Police Station in Lagos, alleging piracy of his recorded music in CD format.

The Commission, on confirmation of the transfer of the suspect and exhibits to the State Criminal Investigation Department (SCID), Panti Lagos, formally requested for the handover of the case to enable further investigation and prosecution.

On subsequent indication that the matter had been further transferred to the Inspector-General of Police Monitoring Unit, the NCC requested the IGP to transfer the case to the Commission for further action in accordance with its statutory mandate.

The Police later transferred the case to the Commission in Abuja on Wednesday January 20, 2010 by formally handing over the suspect, case files and exhibits. The complainant, the suspect and some key right owners whose works were allegedly infringed, have since made useful statements vital to the prosecution of the case by the Commission.