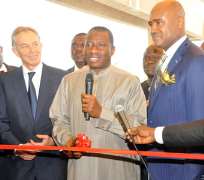 SAN FRANCISCO, April 20, (THEWILL) –President Goodluck Jonathan, Saturday in Lagos, declared that the Transformation Agenda of his Administration is not a magic wand that will wipe away all the challenges confronting the country.

"The great task before us as a nation is to demonstrate unfailing love wherever we are and to show that underlying our faith and belief is peace and harmony and never hostility or violence," he said.

According to the President, "the task of achieving our greatest potential as a nation lies in the collective effort of every individual and community, underpinned by love. If we all do our part, no matter how small, the Nigeria we crave will be a reality."

Jonathan, who made the declaration while dedicating the House on the Rock Cathedral, maintained that the foremost task before his administration is decidedly to demonstrate unfailing love for all and not hostility or violence.

President Jonathan, who was presented with a sword by the Church was accompanied to the function by the Minister of Trade and Investment, Dr. Olusegun Aganga; the chaplain of the Presidential Villa, Rev. Obioma Onwuzurumba; Executive Secretary of the Nigerian Christian Pilgrims Commission, Mr. John Opara; and his Special Adviser on Media and Publicity, Dr. Reuben Abati.

His declaration came on a day the former Prime Minister of Britain, Tony Blair, recalled the difficulty of transforming his country as he maintained that the task of national transformation anywhere in the world requires the undaunting efforts of committed leaders.

Blair, was accompanied by his wife, Cherie, at the dedication ceremony where President Jonathan noted that the country has passed through many rough times, especially during the military era from which intercessory prayers of Christian faithful helped to deliver the nation.

Describing the Cathedral as an achievement of science, technology and the presence of God in the lives of Nigerians, Jonathan said "it is also an unmistakable demonstration of our capacity for great achievements.”

He commended the Senior Pastor of the House on the Rock, Rev. Paul Adefarasin, for his vision, saying "This beautiful Cathedral will remain a true bastion of glory to God Almighty and a shining example of love for human kind, standing on the Rock of the Lord forever and ever."

In a keynote address, Blair prayed for the Jonathan Administration in its effort to transform the lives of Nigerians, many of whom, he noted, are still poor.

Going back the memory lane, Blair said "in getting things done, the hardest thing I found, is having an idea and transforming that idea into reality," adding "Making it happen and getting it done was tough."

Maintaining that it is an abomination for any reasonable government to hurt the poor, the former Prime Minister, who is also the founder of the Tony Blair Faith Foundation, said investment in the people, their health, education and shelter will help greatly in moving the nation forward.

Expressing optimism in the ability of the country to overcome its current challenges of insecurity, occasioned by religious zealotry, Blair said the quest for religious peace and reconciliation are global issues that are not peculiar to Nigeria alone.

He cited the example of Jerusalem and the Middle East where there is so much conflict, saying he "will love to see the day that Jerusalem will not only be a holy place but a centre of love for all."

Delivering his homily, Rev. Adefarasin, who described Blair as his mentor in the area of inter-faith, to which he admits he is committed, decried a situation where the rich gets richer and the poor gets poorer.

He urged government to uphold equity and equality among citizens within the ambit of the rule of law, expressing the hope that Nigeria will be great.