MOST MARRIAGES SURVIVE BECAUSE OF ONE PARTNER 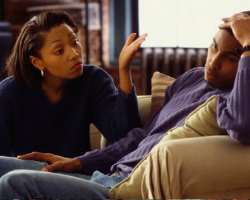 The usual cliché is that it takes two to make a successful marriage and communication is usually over stated as magic. Here comes a different view that it is the hardest working partner that makes the other fool in the marriage, see reasons he must stop behaving unethically himself before she screams out. So it is not unusual to see the marriage of a serial cheater intact while those partners that struggle hard eventually succumb.

Ladies are generally groomed to be the best homemakers, the most responsible and the caretaker of the family. The boys are generally expected to be boisterous but also the protecting man of the house. No matter how we slice it, marriage standard for man and woman are different. The first opportunity boys and girls get to be independent from parental homes, many go wild either in colleges or in another city away from homes.

More girls than boys regret their wild days in colleges because they want to settle down earlier than boys. Some may get married to their sweethearts from high schools or colleges. Since there are usually not enough boys ready to be tied down, other girls marry older men early. The only disadvantage of marrying in the same age group is that most girls are more matured than their partners. It may lead to conflicting decisions.

Moreover more girls opt for careers these days and by the time they are ready to marry, their high school sweethearts are gone or attracted to younger girls. Recently, it is almost difficult to find young men willing to marry early. There is no rush because they get all the sex they want during hook-ups in school: girls are described as virgins at the beginning of the year, then called sluts later and lesbians at the end: Sourcewww.

The fact remains that too much responsibilities are put on women since nobody can have it all. They have to juggle careers with being the responsible partner at home. Their children depend on them physically and emotional in most cases than on their partners. In an economy that has gone south, some of these young women become hustlers right from colleges and are exploited by moneybags or they milked moneybags for tuitions.

In China for example if you are not married by the age of 28, ladies are labeled leftovers. It is at the age ladies are getting out of professional schools, reaching for their dream careers, which have less to do with men and more to do with themselves. They no longer wait as their grandmothers for men to provide toys, cars, and houses with fence.

Modern women have decided to stake their chances on careers rather than wait for men to take care of them. By the time they come out of professional schools and jump into legal, medical and financial institutions, they are financially secured. At the same time, men their age feel threatened and insecure around them. Others are married.

Around the age of thirty, they are more seasoned than their cohort men. Consequently, the experience shows up in their marriages. They become the stronger partners that keep the marriages together if they want to, no matter what type of men they end up with. A persevering woman keeps her marriage, even when others advise her to get out.

There is no doubt that professional single women have tougher time landing a man in Africa, Asia, Europe or America unless they are willing to compromise with young men they can’t stand, consider less deserving or older men they would not normally marry.

Sometimes, professional single women meet older men that are willing to encourage or nurture them in their challenging careers. These are men that that have learned from the mistakes of those that used to go to the old countries in Africa, Europe and Asia looking for virgins they can bring back to Europe and America. Their worst nightmare!

Contrary to the rationale that ridiculed sugar daddies would not live long enough, reality is that he would be around longer than most modern epileptic marriages and far better than those younger men that bang wham and disappear. Since most women are more mature and clever in their thinking, they look for men that would help them raise their children longer, even if those children are not his.

Unfortunately, advantageous use of women’s power on African and Asian men outside home bases has contributed to more marriage break-ups in Diaspora than one could even imagined in home countries. The numbers of single women in black communities are more than other ethnic groups, about 50%. Once there is no man at home, their children are left with women already overburdened as family provider and comforter.

African women in Africa have always been the support and pillar of the family. Though the sociopolitical landscape is changing especially with the dwindling middleclass, Africa remains the best place to raise children as an intact family unit. The irresponsibility that plagued men with limited role inside the home all over the world, is also manifested in Africa. But African women in Africa cope better than those in Diaspora.

It has to do with extended family support. Most African Americans had the same in the South before attractive factories in the North turned agricultural labor sour. In their attempt to provide for the family, African American women leave their children with the grandmother and they become the support of their extended families. So grandmothers are forced to raise two generations. It is easier in Africa if within the same household.

Usually men know when they are getting into relationships with domineering ladies. Since there are some men that are more responsible than the women they married, this article generalizes on most women holding the families together. So those men reading this have a reason to complain that it is their wives that are irresponsible. Accepted!

Many of them accept their partners for what she was before they met her. When a lady calls her boyfriends in front of her partner, and says she knows women that expect their husband to buff her as she has sex with her boyfriends; please do not complain or go hyperbolic. Do not claim ignorance if you pimp your wife for power, wealth or a job.