ORIENTATION COURSE AS IT BEGAN IN ASAYA CAMP 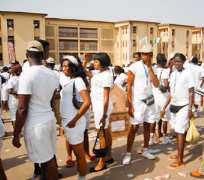 Last Tuesday, all routes led to Kabbah in Kogi State as the not-so-busy town played host to a set of determined fresh graduates. From all four corners of the country, they came and their mission was to partake of the 2013 Batch A orientation course organised by the National Youth Service Corps, NYSC.

Even the roads of Kogi State could testify to the influx of visitors into the State. The vehicular traffic was hectic and vehicles were packed full of passengers comprising substantially of youths. Even commercial motorcyclists took part in the frenzy.

They and the commercial drivers made brisk business as they ferried youths coming into the State to one sure destination- Kabbah. It afforded the avaricious ones among them the opportunity to prey on the visitors by taking advantage of them by a wide margin. I nearly fell a victim but for the advice given me by a serving corps member in the State. She hinted me on the fare I am expected to pay for each drop.

On getting to the camp gate, my eyes immediately caught the sight of a mammoth crowd all struggling to get through with the registration process. This had the propensity of making an arrival like me conclude that it would take beyond a day for the registration procedure to be done. This was to be expected as it is the first day of camping. Yet, it did not take long for this fear to be allayed courtesy of NYSC Kogi's ingenuity in providing enough units to cater for the prospective corps members.

From the entry port, bags were searched by camp officials for outlawed items. After this, I was directed to the computer room where my documents were vetted and my data entered into the system. This got me a platoon to where I immediately proceeded for my kits, mattress and meal ticket. And so went the first day!

The 2013 Batch A swearing-in ceremony is a day away. To this end, training of corps members were taken a notch higher. After the early morning parade and light jogging, the entire platoons were given portions they are expected to clean up and they went about it!

Trainings for the next day's event took a significant part of the day. The soldiers drilled the corps members to a point of perfection. Later in the day, there was a session where the Camp Director addressed the corps members and attended to their questions.

The much anticipated day saw a sublime array of corps members in their ceremonial wear. They had gathered early and appeared ready to be formally inducted into the one year national youth service.

The Governor of Kogi State, Captain Idris Wada could not make it to the occasion but was represented by the State's Commissioner for Youths and Sports- Dr Anthony Tunde Okeh.

In his address, the Governor congratulated the corps members for the successful completion of their studies. He told that the orientation course is to equip the corps members physically,socially, mentally and psychologically to face challenges during and beyond the national service.

Speaking along the purpose of the event, the Governor said, "The swearing-in ceremony performed by the Chief Judge today is important in the discharge of your functions of national service." He pointedly disclosed that the corps members will be held accountable for their actions on the account of the swearing-in.

Before administering the oath of allegiance, the Kogi State Chief judge- Honourable Justice Richard Ajana represented by Justice Richard Olurunfemi said, "It is a great pleasure witnessing the occasion of your swearing-in again as members of Batch A 2013." He warned that what the corps members are about to undertake is a solemn event and that they should see it as such.

Earlier in an address, the State Coordinator of NYSC, Mr. A.A. Enweonwu stated that at the close of registration by 12 midnight on March 6, 2013, 1629 corps members were registered for the 2013 Batch A Orientation course. This figure comprised of 733 males and 896 females.

According to him, "The swearing-in ceremony is important because it commits corps members to the oath of unalloyed service to their fatherland."

Side attractions in the event included a tug of war competition, the inspection of the corps members by the Governor and the signing of the oath of allegiance forms of six corps members representing the six geo-political zones of the country by the State Chief Judge.