ASUU Slams Uniabuja For Shutting Out Union Members From Secretariat 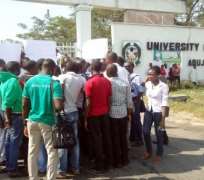 SAN FRANCISCO, March 08, (THEWILL) - The authorities of the University of Abuja have come under attack from the Academic Staff Union of Universities (ASUU) for allegedly shutting out members of the union from their national secretariat located within the permanent site of the school.

Problem started when the UniAbuja chapter of ASUU tried to host a seminar on the crisis in the university but were prevented from using the National Secretariat of the union by the school's authorities.

Condemning the action of the university in a statement issued Friday and made available to journalists, was the National President of ASUU, Dr. Nasir Fagge.

He noted with dismay what he described as the constant use of security personnel in violating the fundamental human rights of Nigerians and particularly on Nigerian universities.

“When ASUU members got to the campus, we heard that there was a kangaroo senate meeting held in the University on Wednesday where the UNIABUJA chapter was asked to shelve the lecture.

"Consequently the university disallowed our members the use of ASUU National Secretariat located within the main campus of the University of Abuja. The lecture was eventually held at the Atlas Hotel Gwagwalada,” Fagge said.

Professor Festus Iyayi, in a paper he delivered at the lecture titled, ‘Twenty Five Years of Education at the University of Abuja: Achievements, Challenges and Prospects’, lamented that like University of Abuja, most public universities in Nigeria have poor governance structure.

He noted that the University of Abuja has been drifting into a failed university with failure to maintain integrity in its admissions, examinations, graduations, appointments and promotions.

Iyayi also maintained: “it certainly cannot claim to be a community of reason where competition between different traditions spur not only the need for achievement but assure its progress in various domains."

Iyayi said the failure would be compounded by the massive looting of resources and even the sheer incompetence or unwillingness to access resources available for its development.

"It is therefore no wonder that, casting its gaze over the sordid affairs in the university for the larger part of its history, the September 2012 Report declared in astonishment that, ‘It is like a fairy tale what is going on in the University of Abuja," he said.

According to the professor, there is the need to restore sanity back to the university with a view to producing fully baked students and enshrine integrity in the institution.

Describing the University of Abuja as a compromised environment, Iyayi noted that “The history of the University of Abuja as an unhappy community indicates that, more than anywhere else, more than, perhaps in any other social institution of its kind or other types, there was need for members to resist, to say ‘no’ and to try to take the university back from the sadists exercising control within and over it.

"Important observations in this regard would be: where was the Council of the University when the Vice – Chancellor and other Principal Officers of the university manipulated and abused procedures, regulations and members of the community?

Professor Iyayi called on Nigerian academics at the University of Abuja to rise up to the task of taking back the university from the tradition of barbarism, arbitrariness and even sadism that especially marked its first decade of existence and has continued to haunt and even define its character in the subsequent years.

The statement added that the 15th anniversary lecture was attended by Branch Chairmen of ASUU including Dr Segun Ajiboye from University of Ibadan, Professor Mahmoud Yakubu while Professor Andrew Ekoja represented both Minister of Education and Executive Secretary of the Nigerian University (NUC)..