ANAMBRA: ECHOES OF A NATIONAL TOUR 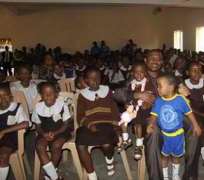 The dust has settled and every man, woman and child in Anambra State has acknowledged that their hardworking, indefatigable and compassionate governor, Peter Obi, is indeed the best thing that has happened to the state in any democratic dispensation.

Any lingering doubts about this were finally extinguished when the information and national orientation minister Labaran Maku – a non-Igbo from the northern part of Nigeria and a non-APGA member – shot Obi to high heavens with praises after his Good Governance Team rounded off their tour of state and federal government projects in the state.

An overawed Maku described as amazing, the number and quality of projects that the government of Anambra State, under Gov. Peter Obi had executed and still executing in the state. The climax came on top of the elegant 165-Meter Odor Bridge, linking the Awgbu and Amaokpala communities in Anambra State.

Hear the minister, 'this is the most amazing project I have seen constructed by any state government since this tour started. The only road project near to this in all ramifications is the one at Mancho, Vom (Plateau State).'

These were not the words of a paid agent. Neither were they the praise of a biased kinsman. They were genuine words of an excited servant of Nigeria, happy that at last there exists a fellow public servant not after his own pocket but in satisfying the greater needs of society. That was the man the minister found in Anambra State in the person of its governor, Peter 'The Rock' Obi. They were words uttered before all manner of national and international newsmen who were part of the tour and who in turn readily agreed that in Anambra State the Messiah had indeed cometh. But that was only icing on the cake.

The minister while later speaking at the town hall meeting that followed at the Women's Development Centre, Awka said that the government of Obi had distinguished itself not just in the magnitude of projects he had executed, but more significantly in the even development of the projects down to the remotest part of the state.

'The governor has moved away from the common practice of concentrating projects in the towns and has reached areas of the state that were neglected by past governments and has opened up the entire state with impressive network of roads and projects cutting across all sectors,' Maku said.

Indeed Obi's commitment towards opening up all parts of the state had before now led some hollow minded people to castigate him, wondering why he should not concentrate development in the capital city like all the others. But Obi is like no other. Driven by unparalleled vision and passion for the state he saw the compelling need to give a facelift to every part of the state. The result is the massive road network that has developed all parts of the state, making Anambra the only state in Nigeria with urbanized villages. Consequently many people now operate from their villages. Anyway, let's return to Maku and his visiting team.

Speaking further, he commended what Obi was doing in education, his wonderful partnership with the Church and other voluntary organizations and described Obi's style as a model worthy of emulation.

The minister also took time off to visit the Innoson Motor Manufacturing Plant in Nnewi which is now thriving due to the conducive economic climate provided by the Obi administration. There, Maku was thrilled by what he saw and which prompted him to announce the federal government's initiative to encourage the company by patronizing it as well as the assurances that work would quicken at Zik's mausoleum.

The minister who also toured various federal government projects in the state, said that the development in Anambra State was essentially due to the Governor Obi's wisdom in working harmoniously with President Goodluck Jonathan, a far cry from what used to be when other governors were here.

Describing Obi's tenure as Anambra's glorious moment, he said that he had restored civility, stability and honour to Anambra State due to his vision punctuated by humility. Maku wasn't the only one effusive with praises.

The president of the National Union of Journalists, Mallam Ahmed Garuba, represented by the president south-east, Chris Isiguzor; RATTAWU president, Yemi Bamgbose; the president of National Council of Women's Societies, Nkechi Mbah; Alistair Soyombi of Ben TV, Uk and other speakers agreed that Anambra was one state where democracy was working. They all accepted being overwhelmed by the projects executed by the governor across all sectors, particularly roads, health, education and attraction of investors. They described his relationship with the masses as exceptional.

In Bamgbose's words: 'some states we visited were even afraid to show us projects, but in Anambra they have so much that they were demanding more time to enable us to see at least 50% of the projects.' What a testimonial! One indeed can only imagine what they would have said had they visited all the 86 projects presented by Obi rather than the fifty-something they managed.

Again these were words of unbiased professionals who do not see Obi as standing between them and the next elections. The average Anambra politician will always find fault with Obi's humongous achievements even when they use and enjoy facilities provided by him. To them, conceding that he has done well will sound the death knell on their own ambitions. For others, they hate him because he has been using the money they covet to develop the state. They want a return to the turbulent past when the state was home to all manner of roguish elements in the name of politicians who looted the collective wealth of the people of the state and rendered the state ungovernable and comatose.

But thankfully God brought the man, Obi, to salvage the state from the bloody claws of the political hawks. In no time Obi banished them from the state's power corridors and today like hyenas beaten to the meat by lions, they are glaring at Obi from a distance, praying for the day he will leave in order for them to claw their way back to their prey, the state's common wealth.

Responding to the praises and adulations heaped on him, the ever humble Governor Obi regretted the inability of the touring party to visit all his projects. He thanked the federal government for the initiative, which he noted would offer the people of the country the opportunity to see what those they elected to lead them were doing for them.

Obi astounded those present by revealing that the state had not borrowed from any financial institution or raised any bond under him. He said that all the on-going projects would be completed while new ones, with money already saved for their execution, would be started.

Concluding, he assured that all secondary schools in the state would get one bus each before the end of the year as well as computers for all the primary schools. 'In a few days' time, we shall give vehicles for security to all the towns in the state; start the Onitsha, Awka and Nnewi Shopping malls and hotel projects, among others', the governor announced.

As the Good Governance Committee continues with their tour of states, it is evident that their experiences in Anambra are ones they would not forget in a hurry. It has afforded the journalists and others in the team an opportunity to sift the seed from the chaff so that tomorrow when they read what hired writers will publish about Obi's Anambra they will laugh, shake their heads and dismiss them as the ranting of the frustrated.