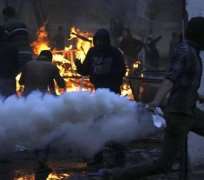 Police fired tear gas at dozens of stone-throwing protesters in Cairo on Sunday in a fourth day of street clashes that have killed at least 41 people and compounded the political challenges facing President Mohamed Mursi.

In the worst violence, security sources said 32 people died in Port Said on Saturday when protests erupted following a court verdict sentencing 21 people, mostly from the city, to death for their role in a deadly stadium disaster last year.

Mursi's opponents have also taken to the streets across Egypt since Thursday, accusing him and his Islamist allies of betraying the uprising that overthrew Hosni Mubarak in 2011.

"Till now, none of the revolution's goals have been realized," said Mohamed Sami, a protester in Tahrir Square on Sunday. "Prices are going up. The blood of Egyptians is being spilt in the streets because of neglect and corruption and because the Muslim Brotherhood is ruling Egypt for their own interests."

On a bridge close to Cairo's Tahrir Square, youths hurled stones at police in riot gear who fired tear gas to push them back towards the square which was the cauldron of the uprising that erupted on January 25, 2011 and toppled Mubarak 18 days later.

The latest protests were initially timed to mark Friday's second anniversary of that revolt.

The U.S. and British embassies, which are both close to Tahrir, said they were closed for public business on Sunday.

The spasm of violence adds to the daunting task facing Mursi as he tries to fix a beleaguered economy and cool tempers before a parliamentary election expected in the next few months which is supposed to cement Egypt's transition to democracy.

It has also exposed a deep rift in the nation. Liberals and other opponents accuse Mursi of failing to deliver on economic promises and say he has not lived up to pledges to represent all Egyptians. His backers say the opposition is seeking to topple Egypt's first freely elected leader by undemocratic means.

DIVISIONS
The army, Egypt's interim rulers until Mursi's election in June, were sent back onto the streets to restore order in Port Said and Suez, another port city on the Suez Canal where at least eight people have been killed in clashes with police.

Although scuffles continued in Cairo, there was no immediate sign of the kind of deadly escalation of previous days in the capital or elsewhere.

In Port Said, residents heard gunshots overnight and shops and many workplaces were shut on Sunday. Residents said the city was tense and there was a risk of further unrest later in the day when the dead were due to be buried.

Many Egyptians are frustrated by the regular escalations that have hurt the economy and their livelihoods.

"They are not revolutionaries protesting," said taxi driver Kamal Hassan, 30. "They are thugs destroying the country."

The National Defence Council, headed by Mursi, has called for a national dialogue to discuss political differences.

That offer has been cautiously welcomed by the opposition National Salvation Front. But the coalition has demanded a clear agenda and guarantees that any agreements will be implemented.

The Front, formed late last year when Mursi provoked protests and violence by expanding his powers and driving through an Islamist-tinged constitution, has threatened to boycott the parliamentary poll and to call for more protests if a list of demands is not met, including having an early presidential vote.

Egypt's transition has been blighted from the outset by political rows and turbulence on the streets that have driven investors out and kept many tourists away, starving the economy of vital sources of hard currency.

Egypt's defence minister who also heads the army, Abdel Fattah al-Sissi, called for the nation to stand together and said the military would not prevent peaceful protests. But he called on demonstrators to protect public property.

Clashes in Port Said erupted after a judge sentenced 21 men to die for involvement in 74 deaths at a soccer match on February 1, 2012 between Cairo's Al Ahly club and the local al-Masri team. Many of the victims were fans of the visiting team.

There were 73 defendants in the case. Those not sentenced on Saturday will face a verdict on March 9, the judge said.

Al Ahly fans cheered the verdict after threatening action if the death penalty was not meted out. But Port Said residents were furious that people from their city were held responsible, triggering wild rampages through the streets.